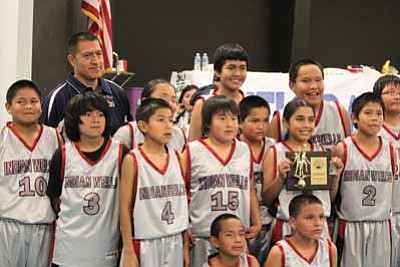 A total of 28 players were split between the A and B teams. Each team had a tremendous amount of growth from the start of the season to the end.

Cory Hollins' squad was a young team team. Returing players Diyanii Yazzie, Shayne Halwood and Ronald Peters led the team most of the way. Upcoming stars like Tristan Long and Ethan Bahe had a strong season. Hollins' team finished with a 6-5 record, grabbing the number four seed in tournament play where they battled a tough Second Mesa team that ended their season.

Coach Orton's group rolled through the conference unbeaten and grabbed the number one seed in the tournament. Theron Olney, Tyler Paul, and Hadley Wilson came back strong this year.

During the tournament, several players filled significant roles to help the Roadrunners reach the championship game. Kevin Kanuho and Blayne Nelson played strong and shot the ball well during the tourney. Corbin Charley was a defense stopper with some game-changing blocks in the semi-final game against Second Mesa. The blocks proved to be what Orton's team needed to pull out a close game.

Jaren Yazzie and Jaken Todacheenie were everywhere they needed to be on the court to help their team win the championship game against Little Singer.

"The commitment these kids make from the start of November through the month of February is remarkable," Orton said. "Whether you're a sports fan or not, you can only feel exuberant for these kids because they have reached a goal that is very difficult to do."