Disaster declaration for Navajo Nation marks shift in tribal-federal relations
Navajo the first tribe in Arizona, and only the second in the nation, to bypass state and get aid directly from the federal government 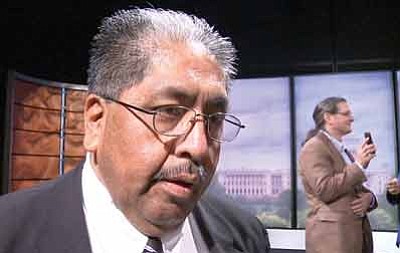 President Barack Obama's declaration last week of a disaster on the Navajo Nation will provide relief directly to the tribe, something that would have been impossible as recently as two months ago.

Tribal officials said the aid, to help repair damage from freezing weather that disrupted water service to thousands, marks an important change in federal-tribal relations because it will not have to go through a state government first.

The Navajo is the first tribe in Arizona, and only the second in the nation, to get aid directly from the federal government. Other tribal leaders called the declaration a "true move" toward an equal relationship between tribal and federal governments.

"It's been a long time coming," said Ned Norris Jr., chairman of the Tohono O'odham Nation.

That was not the case on Jan. 25, when Navajo Nation President Ben Shelly signed a disaster declaration asking for assistance because frozen pipes had lead to water shortages for 2,000 families. His request for federal aid went to Arizona Gov. Jan Brewer and New Mexico Gov. Susana Martinez, who evaluated it before sending it on to the president.

But as the request was on the governors' desks, the president signed a change in the law governing the Federal Emergency Management Agency (FEMA). The changes, which were part of the Superstorm Sandy Relief Act, included the provision allowing tribes to go directly to the president instead of through a governor.

Even though the Navajo request came to the White House through the governors, it was sent back directly to the tribe.

Besides being a recognition of tribal sovereignty, supporters said the new law can streamline the process when time is critical.

"In cases of emergency like this, it's great that Obama is responding," said Jared King, a spokesman for the Navajo Nation Washington Office.

Under the declaration signed Tuesday, the federal government will give the tribal government three-quarters of the cost of replacing damaged infrastructure, said John Hamill, a FEMA spokesman. That assistance will not be available to individuals in the tribe, he said.

The tribe will have to cover the rest of the cost. Hamill said an official estimate of the damage will not be known until after an assessment, which may take a week or two because of remote locations of the damage.

Brewer's office also declared a state of emergency Feb. 1 and set aside $200,000 for repairs.

The Navajo Nation is the second tribe in the country to get aid directly from the administration: The Eastern Band of Cherokee received aid Friday to help recover from January mudslides and major flooding.

Hamill said that the aid will go to help people on the ground, as it has in the past. "We expect it will be successful," he said.

"This is welcome news for thousands of Navajo people who have suffered because of this devastating freeze," Kirkpatrick said. "We need to do all we can to ensure residents have running water at home and at critical facilities in their communities."

Norris said tribes have made "significant progress" in exercising their sovereignty recently because Obama and the current Congress have given them more recognition.

"It's tribes having a place at the table in recognizing tribal government," Norris said.