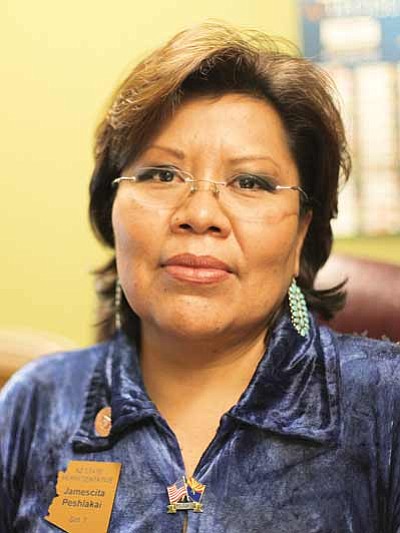 Legislative District: No. 7, which covers northeast Arizona, including all of Apache County, most of Navajo and Coconino counties, and portions of Mohave, Gila and Graham counties.

Previous or Current Elected Offices: None

Highlights of Community Involvement: Getting involved with protests related to Arizona Snowbowl and the San Francisco Peaks.

"I think I found my voice because eventually being a veteran, a Native American, a woman, we have ... sacred duties of women, sacred duties of mothers. And that is to protect the future of our children. I think for me, the prayers of my people, the prayers of the medicine men are tied into the land, the mountains, the rivers, the waters, everything. And so I feel kinship with the places and the environment where I come from. They protected me in my life, so I, in turn, protect those sites."

Why She Ran: "I've done so much outreach, been so concerned about the future of the people of northern Arizona, not just in tradition and culture and religion and spirituality, but also in education, health care, workforce issues, energy, everything."

Her Focus: Helping rural veterans, protecting sacred sites and the environment in her district.

A Bill: Prime sponsor and co-sponsor on more than a dozen bills that deal with such issues as creating a firefighter and EMT memorial to asking the governor to create a cabinet-level Indian affairs department in Arizona. She's planning to introduce a bill protecting students from non-accredited post-secondary institutions that don't fully explain costs and benefits.