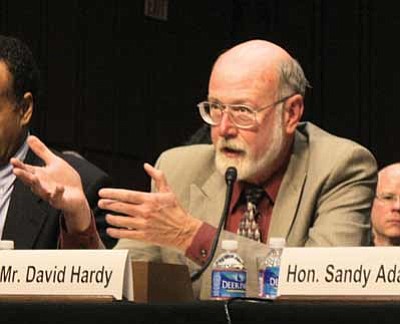 A Tucson lawyer told a Senate committee Feb. 27 that a proposal to limit the sale of semiautomatic weapons is a misguided response to recent headline-grabbing mass shootings.

David Hardy, whose law practice focuses on issues related to gun rights, told a contentious Senate Judiciary Committee hearing that the characteristics of a semiautomatic weapon cited in the Assault Weapons Ban of 2013 are superficial and would not prevent gun violence.

The almost four-hour hearing was punctuated by yelling, crying and clapping from an audience that included parents and students from Sandy Hook Elementary, the Newtown, Conn., school where a gunman killed 26 people in a December shooting.

Sen. Dianne Feinstein, D-Calif., said her assault-weapons ban might have helped stop Jared Lee Loughner, the shooter in that Tucson attack, from killing as many people as he did.

Besides limiting the sale, transfer and manufacture of semiautomatic rifles, pistols and handguns, Feinstein said her bill would ban high-capacity ammunition magazines that allow for rapid fire.

"It's only when the shooter has to change magazines that police have a chance to take them down," Feinstein said, noting that bystanders stopped Loughner when he stopped to reload his gun. He might have been stopped even sooner, she said, if he had not had a high-capacity magazine.

Lawmakers enacted an assault-weapons ban in 1994, and opponents said it did not reduce gun violence then.

Sen. Lindsey Graham, R-S.C., said that current gun-control laws, such as background checks, are not being enforced. Limiting the number of rounds a civilian can possess could endanger the lives of people who might be able to defend themselves with more firepower, he said.

"If there are 4 million AR-15s owned by people like me, they're in common use," Graham said, referring to a type of semiautomatic rifle. "I think the place we should start is enforcing the laws, instead of creating a false sense of security."

Hardy agreed with Graham, saying that he had been in a situation near Tucson in which he had a shotgun in his car but wished he had a more powerful weapon.

"I live about 60 miles from the border," he said. "If you encounter a drug cartel, you're going to need more than that."

But Milwaukee Police Chief Edward Flynn said enforcement of existing laws will only go so far. Police need laws to keep high-powered weapons out of the hands of criminals, he said, to a passionate round of applause from the audience.

"Prevention is making it difficult to outgun the police," Flynn said.

Sen. Al Franken, D-Minn., chastised opponents for being insensitive to victims of gun violence, saying they ignore the reality of a mass shooting.

Despite the emotion of last week's hearing, Sen. Richard Blumenthal, D-Conn., said lawmakers are making progress on the issue of gun control.

He said the "powerful" testimony last month of Gifford's husband, Mark Kelly, has made the once-untouchable issue of gun control more of a bipartisan issue. Feinstein's bill is a step in the right direction but not the last word, he said.

"Nobody is saying this will end gun violence," Blumenthal said. "Everyone can agree we need more research on gun violence in this country."