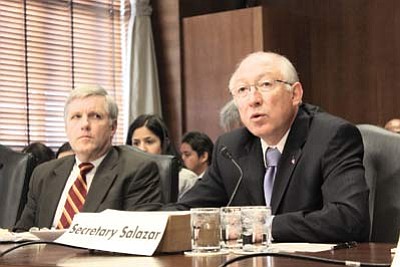 WASHINGTON - The Interior Department announced details June 18 of the 10-year, $1.9 billion buy-back of "fractionated" lands from Native American tribes and tribal members that could be worth tens of millions in Arizona.

The program aims to give tribes a chance to make productive use of fractionated lands, property that has dwindled in value after being divided repeatedly over generations.

The buy-back is one part of the federal government's $3.4 billion settlement of the Cobell lawsuit, which accused the government of mismanaging tribal trust accounts for decades.

He said the department hopes to spend at least two-thirds of the $1.9 billion fund by the end of President Barack Obama's term in 2016.

Among Arizona tribes, the department said the Navajo Nation could ultimately get about $102.9 million in buy-back money. The Gila River Indian Community could get $60.6 million, the Salt River Pima-Maricopa Indian Community about $17.4 million and the Fort Yuma-Quechan could get $6.5 million.

The four Arizona tribes are included in a top-40 list of tribes with the most fractionalized land interests that would stand to get the greatest share of buy-back money.

Nationally, about 220,000 landowners on nearly 10 million acres of trust land will get an opportunity to sell their land back to their tribes.

Hayes said the department has been working with tribes since December, when then-Secretary Ken Salazar announced the plan, to develop cooperative agreements with tribes on the terms and structure of the settlement program.

In addition to the caps the government set, there will also be a minimum of $75 paid per parcel of land evaluated, officials said.

In addition to the cash payments to individuals and tribes who transfer their interests, portions of the payments will be transferred to a higher education fund set up as part of the Cobell settlement. That account, capped at $60 million, will be used for scholarships to help tribal members go to college or vocational schools.

By the end of the year, the department hopes to have worked with 10 to 12 tribes on cooperative agreements that will help spread the word about the program and begin the process of determining the fair-market value of fractional land.

"Cooperative agreements provide guiding lights on how we administer this program," Hayes said.