FEMA reimburses 12 chapters for disasters dating back to 2005 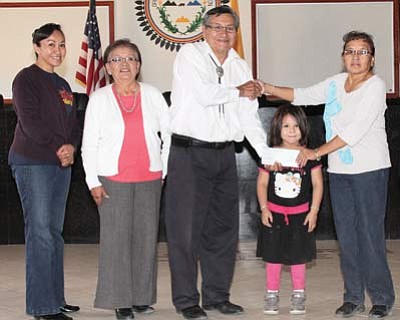 "Our chapters have been waiting years to be reimbursed for money they spent for emergencies since 2005. I am happy to report that we have completed a task that has been plaguing the Navajo Nation for years," Shelly said.

The checks went to 12 chapters in Navajo Eastern Agency June 14 and June 17.

FEMA reimbursed at least $2.6 million to chapters and the Navajo Nation government. The agency reimbursed spending related to Operations Hashtlish, Monsoon and Snowfall emergency spending as a result of the monsoonal floods of 2006.

In total, FEMA gave the Navajo Nation money for 846 disaster projects for up to 75 percent of the total costs.

"I know this has been a long time in the making. I am pleased that our Department of Emergency Management was able to move forward and help chapters receive their money," Shelly said.

"We have many checks for many chapters and we have been coordinating with all of them to disburse their checks," Whitehair said. "We are thankful for all the hard work FEMA and FEMA Corps did for us in the past few months. They have been very helpful and provided great insight."

She added that the money must be used for certain projects.