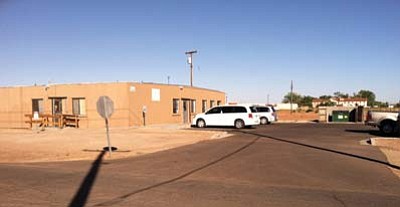 WINSLOW, Ariz. - Three years ago Bennett Kagenveama, a jeweler from the Hopi village of Shungopavi, 65 miles from Winslow, found himself checked in at the Community Bridges Stabilization and Recovery Unit in Winslow. Kagenveama had had his fill of whiskey or vodka - he doesn't remember which - and would have spent the night passed out on a Winslow street if the substance abuse center didn't exist.

This month marks Community Bridges' fifth year taking in people with substance abuse problems and helping them get to a point where they can ask for more help. Or repeat the process. This was Kaganveama's second time through.

"When I was here my family didn't know where I was," said Kaganveama, 49, seated in a lobby chair in the 16-bed facility where he came the night of October 3, 2010. "When my son found out he wrote me a letter and told me my family couldn't tolerate my behavior anymore. I knew the problem was me being drunk all the time. My son made me come to my senses."

Community Bridges, located at 125 N. Cottonwood, assisted in the process. The staff is made up of trained emergency medical technicians and others who provide a week (typical) to 30 days of vigilant non-medical care for those suffering the effects of alcoholism or other substance abuse.

Many people take it for granted that a handful of people, some Native Americans, will freeze to death during the winter if they collapse where the police can not find them. More often, police will pick them up and take them to a drunk tank in Winslow or Holbrook, putting a financial burden on cities with tight budgets.

According to Winslow City Manager Jim Ferguson, churches and service clubs tried to address the problem, only to find protests from neighbors concerned about property values.

"The 'not-in-my-backyard' thing is a big issue," said Ferguson. "We started giving out blankets just to do something, but the city itself is not a social service agency."

He said things started looking up when the Northern Arizona Regional Behavioral Health Authority (NARBHA) took stewardship of the problem and located grant money from the Arizona Department of Health Services. But the "not in my backyard" problem stymied even the pros.

Enter Allan Affeldt, owner of Winslow's La Posada hotel and, at the time, the city's mayor.

"Neither Winslow nor Holbrook got the funding but both had the expense of dealing with the problems of alcoholism," said Affeldt. "Somebody would get drunk, fall down and be transported by ambulance to the hospital, which would get no reimbursement. Or the police would pick them up and there would be liabilities associated with that. It was a mess all around. Before I was mayor when I was on the chamber of commerce board I dealt with it as a businessman. Drunks would wander onto my property and accost my guests. It was a humanitarian problem and a business problem."

For Kaganveama, and hundreds like him, the presence of a safe place to get help didn't exist until a coalition of city, county, state, tribal and healthcare officials found a way to get federal, state and local money.

But the biggest problem was still where to put the substance abuse center. Affeldt said that he preferred a site close to the Indian Health Services complex northwest of downtown, and that he couldn't muster enough votes on city council when the owners of adjoining properties complained.

"We were in danger of losing our grant money, what many, many people had been working for many, many months to get," he said. "We came to a compromise. Since it was more of a downtown problem - that's where the liquor stores are - my idea was partly a social statement. As a community we have to step up. So I decided to give the (La Posada) land to the project and got wide support, including from the neighborhood where it's located."

With the location logjam broken, NARBHA placed two identical modular units built in Phoenix where they stand today in Winslow and Holbrook. Each building had a June 2008 grand opening.

According to Laura Hartgroves, director of network and provider of services for NARBHA, the first operator was Na'Nizhoozhi (Beautiful Work) Center Inc. out of Gallup, New Mexico.

"NCI was our first partner," she said, "and came recommended by the Department of Health Services. They had a lot of experience working with American Indian traditional modalities for service. NCI operated the Winslow and Holbrook programs for about a year, but their main operations were in New Mexico. It was a challenge spanning two states."

In 2009 NARBHA contracted with Community Bridges, a statewide provider offering over 25 programs in 11 cities in Navajo, Apache, Cochise, Maricopa, Pinal, Gila and Yuma counties. To manage the cultural needs of its constituents, NARBHA employs Gabriel Yaiva, of both Navajo and Hopi descent, to travel the state as its tribal liaison. Yaiva's makes sure that traditional healing rooms and buildings - similar to a hospital offering a chapel - are built with both spirituality and neutrality in mind to accommodate the beliefs and practices of the dozen tribes native to northern Arizona.

When asked about the fact that nearly 100 percent of those who use recovery centers in reservation border towns like Winslow and Holbrook are Native American, Yaiva gave some historical context.

"It's not just that alcohol is available in border towns and not on the reservation," he said, "but what is the cause? The cause is a social issue common to colonized people worldwide. Colonization and assimilation took place in a lot of these families just one and two generations ago when they were forced to intertwine with Western society. I'm not making excuses, but the problem must be addressed. What has the community of Winslow done to address these social ills? We are grateful that the owner of La Posada put his money where his mouth is."

Hartgroves echoed that sentiment, saying Affeldt's donation of land and his ongoing support have made a huge difference in the lives of many. The Winslow center has served 609 people between July 2011 and June 2012, NARBHA's financial year, and is on pace to exceed that total with Community Bridges treating 544 patients through March 2013.

Fears that such numbers would bring problems to the vicinity are unfounded, according to Winslow Community Development Director Paul Ferris.

"Against a multitude of zoning conditions (for the center), there has not been a single violation or complaint," Ferris said. "It seems to have been accepted into the community."

After the state legislature approved Governor Jan Brewer's move to expand Arizona Medicaid, last week, Hartgroves said plans for growth in service likely will be announced this summer. She added that success stories such as Bennett Kaganveama's are a gratifying part of her job. The staff at Community Bridges is a big part of these successes.

"A high proportion of the staff who work at Community Bridges themselves are in recovery," she said. "We call them peer support specialists and a high percentage of them are Native American. They can say to our residents, 'I've been there. This is my story. I've walked that path,' and that's a strong and powerful message."

As for Kagenveama, who said he had been on and off alcohol since he was 14, his continuing attendance at A.A. meetings and work with the Hopi Summer Camp keep him on track toward a fourth year of sobriety.

"I meet people who talk about Community Bridges and I tell them I've been there," he said. "It's a safe place to go; three meals a day in a clean and helpful environment. They will stabilize you until you get back on your feet, right down to where to go to get further treatment."

"If there is violence and drunkenness in your family and among your loved ones, bring them here and check them in for initial treatment. The difference is that people listen and care about your situation in here. Out there if you talk to someone they're just dealing with another drunk. It's not going anywhere, just repeating itself. Community Bridges changed my life for the better. I have established myself back to my jewelry business. My family looks up to me, and I am a better man than I was three or four years ago. I'm doing really good keeping myself happy and the people in my family happy."

As he stood to leave, Kagenveama announced that he will open a gallery in Second Mesa next year and wants Community Bridges to celebrate with him.

"I'll be there, Bennett," he said. "I will definitely be there for you."