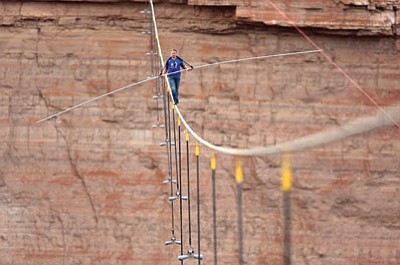 LITTLE COLORADO RIVER GORGE, Ariz. - On June 23, an emotional Nik Wallenda ran the last few steps across a wire strung across the Little Colorado River Gorge fulfilling what he has said was a lifelong dream. He is the first person to walk across the Grand Canyon.

Technically the walk took place on the Navajo Nation and not in Grand Canyon National Park and he didn't walk across the Grand Canyon. The walk aired live on the Discovery Channel to 223 countries.

"The Grand Canyon was a place I visited as a kid," said Wallenda. "For as long as I can remember it has been a dream of mine to cross over such a spectacular setting."

The Navajo Nation hopes that the attention brought to the area from Wallenda's successful high-wire walk across the Little Colorado River Gorge on Sunday will translate into increased tourism and money to the area.

Geri Hongeva, media representative for the Navajo Nation Parks and Recreation Department, said before the walk on Friday that the publicity from the Discovery Channel during the two-hour broadcast on Monument Valley, Antelope Canyon, and Horse Shoe Bend among the tribal parks could have a lasting economic benefit to the Nation.

Wallenda said that when he walked a tightrope across Niagara Falls last summer, the area benefitted. He believes the nation has good reason to expect that there will be a positive economic benefit to this event.

"The idea of this is that it's great for this area, not just great for Nik Wallenda but it's great for everybody, including the Hopi and the Navajo," Wallenda said. "We are shining the light of the world on this area which can be nothing but great. We have the story of Niagara Falls and that fact that we brought in about $25 million economic impact within the first week of that event. Over a five year stretch, they are estimating a $120 million economic impact."

Wallenda completed his highest walk ever in just less than 23 minutes in shoes his mother made. He was 1,500 feet above the ground, a height greater than the Empire State Building. He carried a 43-pound pole for balance and walked on the same wire that he used at Niagara Falls. And most daring of all, Wallenda walked without a safety tether.

"If there were any problems, gravity obviously pulls you down, I would grab that wire or wrap myself around it," Wallenda said. "We play up the drama, but I tend to play it down a lot of times, too. I have a beautiful wife and three beautiful children. Safety is of the utmost importance to me and my family."

While he said he was confident that his training had prepared him for the wind he would face on his walk across the Little Colorado, the combination of wind, and the movement of the cable made the walk more challenging than he had anticipated.

"It was stressful. It took every bit of me to stay focused that entire time," said Wallenda. "As I said at the beginning, just so unpredictable and out of the blue, there would be a 35 mph gust. I was looking down at the anemometer and saying that's too low to get a reading up here."

"I can't thank you guys enough," Wallenda said, speaking to Shelly and Jim. "The Navajo Nation has been incredible to work with and for being such a big part of helping my dream come true. Again, I can't thank you enough."