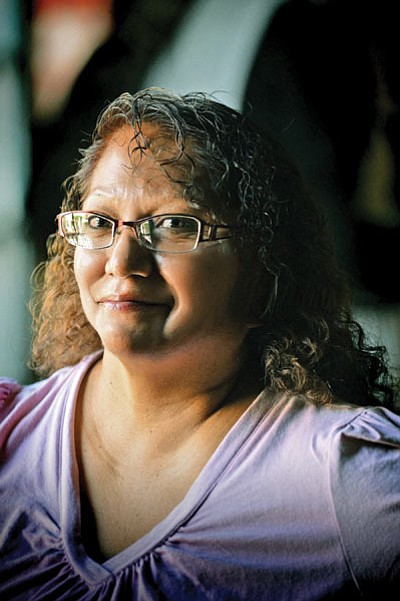 WINSLOW, Ariz. - Gwen Setella is a Hopi pot-maker using only traditional methods and natural materials. She is also a State Park Ranger at Homolovi Ruins State Park in Winslow. The Navajo-Hopi Observer asked her to talk about her traditional style pot making and being honored as an Arizona Culture Keeper.

Your are a Arizona Culture Keeper. What is that?

Yes correct, in 2007 my family was nominated for the Arizona Culture Keepers Award. It is an award given to individuals, groups or organizations that uphold and try to keep your culture strong. We were nominated by Theresa and Ken Jagkway. We were awarded the honor in 2011. 2012 was the last year the awards were given. Only 100 Culture Keeper awards have been given out over 10 years and no more will be provided.

Where is the Culture Keepers information publicly maintained?

It is at the Kierland Westin Resort in Scottsdale, Ariz.

How long have you lived in the city of Winslow?

I've been here 20 years. I grew up on the Hopi Reservation at a place called Snowbird Canyon. It was a small house and in time I needed to move away. I wanted to be independent so I moved to Hopi Housing in Winslow then moved on to a regular residence here.

Where do you get the clay for your pots?

I like to mine my clay in the Jeddito area. I prefer to use the Jeddito clay because of the texture, its ability to uphold while you are molding and the nice coloration it brings out when it's fired. There's other sources of clay on the Hopi reservation such as Mesa Wall and a place called Beaver Dam. As a Hopi potter I experiment with all sources of clay, from Mesa Verde, Homolovi, I also experiment with clays from Indian Wells, Santa Clara, as well as other places.

Where did you learn your pottery skills?

I come from families of potters, I fall into the Frog Woman Feather Woman pottery style and we were known for the white polychrome made from the native clay. It has a white slip we apply to it, several coats and then it's painted with the native clays and pigments. Everything we use for our pottery comes from the earth. Then it's fired. My Matrilineal Clan is Bear and my Patrilineal Clan is Water. I give credit for my pottery making abilities to the Bear and Water Clans and have both marks on my pots.