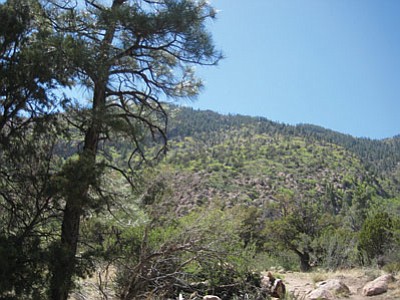 FLAGSTAFF, Ariz. - Elden Lookout Trail No. 4 is less than six miles, but the direct uphill climb makes this a challenge for most hikers.

Elden Lookout Trail starts at about 6,900 feet and tops out at 9,299 feet. Hikers must step over some small boulders or large rocks on the way to the top. Some portions of the trail have steps to help hikers along. In some areas climbers must deal with plenty of scree. That is why this is one of the few mountains in the Flagstaff area with a rating more difficult than Class 2.

Search and rescue teams have rescued unprepared hikers in the past. A couple hikers have died. This is a short hike that hikers should not take lightly. Hikers need to be in shape and prepared.

It has become an annual tradition that the end of the school year means a hike with Hopi High colleague Dennis Williams before he goes off to greener forests in Costa Rica.

Aside from the great workout, there are several other reasons to hike Elden Lookout Trail. The highlight for many will be the aspen forest right toward the top. The lower portions of the trail offer Ponderosa Pine and Alligator Juniper. Those Alligators have plenty of limbs making them ripe for climbing.

There were also many daisies along the way, surprisingly there were more toward the top.

Another highlight is the scenery with fantastic panoramas in every direction. The views include Oak Creek, Mormon Lake, Humphreys Peak, Bill Williams Mountain and the Painted Desert. The city of Flagstaff sits below as well. Of course, the fire lookout tower sits at the top of the mountain.

Mt. Elden is essentially a lava dome. There was a big fire on Elden in 1977 and hikers can see that the trees are still making a comeback in some places.

For those who either don't want to make the climb, or want more mileage, there are plenty of other trails in the Mt. Elden system. Here are a few: Elden to Buffalo Park, about 4 miles; Fatman's Loop, 2 miles; Pipeline Trail, 2.8 miles; Oldham Trail, 5.5 miles; and Rocky Ridge, 3 miles.

The Elden Lookout Trail is located just north of the Flagstaff Mall off of U.S. 89. The parking lot is paved, but there are no restrooms.