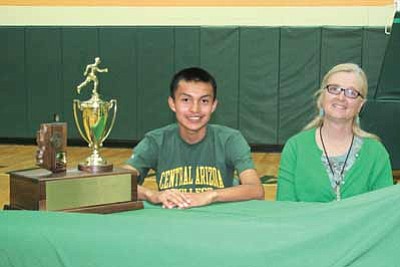 TUBA CITY, Ariz. - Shawn Tsinnijinnie is from Coppermine, a small Navajo ranching community north of Tuba City. This is the place he runs during the summer. The wide open spaces and wild animals keep him company as he runs through the dirt and sand trails perched on top of the redstone sand bluffs that line Gap-Coppermine chapter.

The awards caught the attention of Central Arizona College. Tsinnijinnie will attend that college this fall with a cross country scholarship.

"I don't consider myself a great runner. There are a lot more talented runners out there besides me and I am not jealous or competitive about my running," Tsinnijinnie said. "I like to make friends and form a brotherhood with other runners and that is what makes me proud of my sport. I have been so interested in cross country running especially by my own family members."

Tsinnijinnie found out his uncles were also runners. A couple were even state champions on a team from Tuba City.

"It was kind of shocking to learn this, but it also motivated me to run harder, try harder and strive for bigger goals with my own cross country team," Tsinnijinnie said. "And it must have worked because I was awarded Male Athlete of the Year at TC High this year. I didn't really think about myself individually as long as I was running my race."

Tsinnijinnie said his biggest motivators are his parents, Lavina Benally and Jones Tsinnijinnie.

"My mom would always be telling me not to be lazy and make myself useful," he said. "She would tell me if I was slacking, to go run, give yourself some time to think. Running has really helped me. Also one of my teachers, Mrs. Teresa Orman, told me it was okay if I ran well or even if I didn't run as well that day. She would say, 'just try your best and you are doing this for yourself, not others, it's all up to you, especially in your true heart.' Mrs. Orman also reminded me that I was representing my community, my culture, my tribes and how running has played such a big part of our tribal history. That also motivated me to do my best."

Tsinnijinnie graduated near the top of his senior class this May and plans on running throughout his college career.