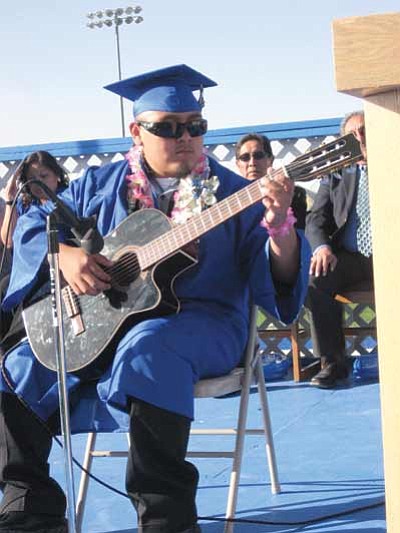 Xavier Simone Sakeva started the graduation off on the right foot with a classical guitar solo.

POLACCA, Ariz. - Keynote speaker Caroline Sekaquaptewa spoke to the Hopi High graduates about the importance of goal setting and perseverance.

Sekaquaptewa spoke to about 70 graduates during the Hopi High ceremony at Bruin Stadium on a windy May 23 as thousands listened.

Sekaquaptewa is a good example of the power of goal setting and perseverance. She juggles teaching, motherhood and participating in Ironman triathlons. These events include swimming, bicycling more than 100 miles and running 26 miles. The Ironman events begin before sunrise and end after sundown.

"I thought about stopping, but then I heard Harvey's voice," she said about her former Hopi High cross country coach Harvey Honyouti, who encouraged her to keep going.

Sekaquaptewa said goal setting is important whether in sports or education.

"Write down every step to reach the goal. Keep setting goals. You have to see it and say it in order to make it real," she said. "There is always room for growth. Goal setting will make you better. Break the goals into smaller parts."

Sekaquaptewa told the students that they will always face obstacles.

"You all have special talents. Just remember the people who helped you," she said. "Don't forget who taught you your values and culture."

Sekaquaptewa said nobody is successful without help from others.

"So give back to the people by helping other people," she said.

During the ceremony, Gilman presented Tomosie with the first Hopi High Distinguished Alumni Award. Tomosie, who graduated from Hopi High in 2000, recently earned her medical degree.

"Anything is possible if you're willing to do the work," she told the graduates.

Adams, advisor for Hopi High's National Honor Society, spoke about the community service that her graduating honor society members gave to the community and recognized each of them.

Adams proudly announced that several of the members have been offered scholarships:

Valedictorian Shelden Nanacasia plans to start at NAU before transferring to the University of Arizona. He will major in biomedical science and minor in communications or education.

"Each senior deserves to be recognized as a scholar in their family," he said.

Nanacasia, who earned the prestigious Gates Millennium Scholarship, said students need to thank their teachers because they gave the teachers migraines. But he added that the teachers gave the students migraines by giving them homework.

Nanacasia thanked his family for support and motivation. He said his academics will help him help the needy including those with disabilities, the homeless and the poor.

"This class had great diversity. We can hold our heads high because we all got game," he said. "Hold your diploma like its gold."

"We went from small lost kids to adults," she said. "Maybe you will come back to be the teachers who you became tired of."

Jenkins said education is a ladder and students need to take it one step at a time.

Hopi Chairman Leroy Shingoitewa told the graduates to give their parents a hand for helping them. He praised guitar student Xavier Sakeva for playing a classical tune during the ceremony as a salute to the class.

"He reminds me of my favorite guitarist, Chet Atkins," Shingoitewa said.

Shingoitewa told the graduates who had earned scholarships that they were only good if they work hard to keep their scholarships by keeping their grades up.

"Act like a marathoner and set a goal," he said.

Noelle Kooyahoema, president of the senior class, remembered the good times such as dancing on Indian Day. She joked that she was excited to graduate with "a bunch of hoodlums." On a more serious note, she said her classmates were smart, creative people who she wished love and happiness.

Gilman praised the teachers for guiding the students along with the counselors and academic support staff.

"Set goals and get motivated," he told the graduates.

As the graduates received their diplomas, Allen Joshevama yelled out what many of the graduates were feeling: "I love you mommy."