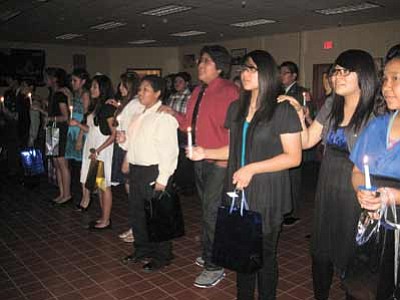 Rita Keith, advisor for the Hopi Jr./Sr. High School NJHS, praised the honor society students from the past year for their many service projects.

Those projects included a $500 contribution to the Hopi Education Endowment Fund, an ongoing recycling project, Books for Tots and the annual Bridge program.

NJHS also received a state award from a philanthropic group for its annual contributions to the Hopi Educational Endowment Fund. The Northern Arizona Chapter of the Association of Fundraising Professionals gave the students the Outstanding Youth in Philanthropy Group Achievement Award. That chapter is a part of the national and international organization of the Association of Fundraising Professionals.