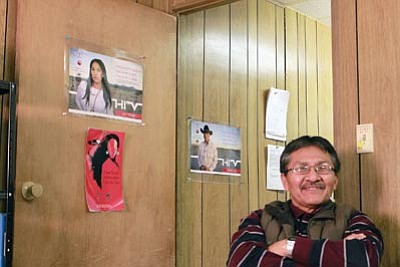 CHINLE, Ariz. - Melvin Harrison drifted far from his boyhood home on the Navajo Nation and found himself addicted to drugs and barefoot on the streets of San Diego.

When he entered a drug and alcohol treatment program in 1987, he had no idea what HIV was or that AIDS would claim the lives of so many he loved. It wasn't something talked about on the reservation, he said.

Then, with one blood test, Harrison faced his own mortality.

"It scared the heck out of me because I was shooting drugs," he said.

Harrison tested negative for HIV. But his experience prompted him to take action in the Navajo community, educating people about the disease as the founding executive director of the Navajo AIDS Network.

"In the Navajo way of life ... on HIV and gay issues, nobody is understanding," he said.

Harrison and others say that HIV is a taboo topic among the Navajo tribe, the largest in the country with more than 300,000 members. Many Navajo, they say, believe that speaking of disease is the same as bringing it into the community.

The Gallup Indian Medical Center in Gallup, N.M., has seen a steady increase of new HIV cases among Navajos over the past 10 years - doctors recorded 35 cases in 2010, up from just 15 cases in 2000. The numbers may reflect an increase in testing, but according to infectious disease specialist Dr. Jonathan Iralu, they may reveal other trends.

"HIV is not just an illness that's present in the East Coast or the West Coast or the inner city," he said. "It's something that's come even to rural America."

Iralu said he sees more cases these days of Navajos contracting HIV from other Navajos, whereas before most patients became infected in cities off the reservation. And more heterosexual people are testing positive now, he said, shattering the misconception that only homosexual men contract HIV.

The Navajo AIDS Network works with the Gallup Indian Medical Center to provide case management and counseling to newly diagnosed patients all across the reservation.

Harrison said his organization probably only works with a fraction of the Navajos infected with HIV, as the stigma of and misinformation about AIDS prevents residents from getting tested.

"If you go down here to the schools or across Navajo [territory], you'll find that many of our high school students, and just people in general, think that's still a gay man's disease," he said.

For volunteer Jerry Archuleta, creating a sense of community and acceptance is perhaps the most important part of the Navajo AIDS Network's impact.

As an HIV-positive gay male living on Navajo land, he knows firsthand how difficult it can be to open up to family and friends.

"They have activities for us to go to where we can learn more about the disease and learn not to dwell on it so much, but learn to live more or less normal lives," he said.

Archuleta said he has come to peace with his diagnosis and that he is thankful for the opportunity to help other HIV patients through his work. Like Harrison, he grew up with no knowledge of the disease.

Today, as many as one in four HIV-positive American Indians and Alaskan Natives remain unaware that they are infected, according to a 2011 Centers for Disease Control and Prevention (CDC) report. The CDC pays for projects focusing on native populations, like the HIV/AIDS Prevention Project, which the commitment to Action for 7th Generation Awareness and Education facilitates. The project, out of Colorado State University, looks to break past barriers on several different Indian reservations.

"Testing, I think, is what's really going to save our communities," said Martha Burnside, a community liaison with the organization.

If people get tested and seek treatment, maybe it will prompt others to do the same, she added.

Burnside said for reasons of confidentiality she couldn't disclose whether or not the project has reached the Navajo Nation. She stressed that aiding communities individually is essential.

"Our tribes are so different," Burnside said. "We all have our own customs."

On the Navajo reservation, Harrison and his colleagues at the Navajo AIDS Network are working with limited money and grants from New Mexico, Arizona and private groups to assist the rising number of HIV patients.

"If there was a doubling of numbers anywhere else, you would find the federal government jumping ... and coming to those communities," he said. "Why is that not happening for us?"