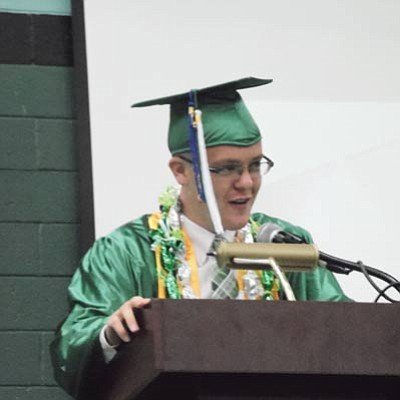 Class of 2013 Valedictorian Ryan Moran gives his commencement address to the capacity crowd at the Warrior Pavilion May 25. Photo/Rosanda Suetopka Thayer

Kenard Dillon welcomed the audience followed by a speech from Valedictorian Ryan Moran.

Moran spoke about the importance of a strong work ethic, finding a job after college and "being prepared for anything in life by pursuing higher education."

Salutatorian Stephanie Geneeha gave her commencement address immediately after Moran. She emphasized her appreciation for her family, her teachers, school administration and her community. She mentioned that she was extremely grateful for all the "education, social preparation and constant support" she felt in abundance at Tuba City High School.

Dennis Bowen, who has served as a longtime school counselor for the Tuba City District gave the keynote address. Ralph Navarre, Tuba City High principal, and Henry Henderson, director of the Tuba City Alternative School, presented the entire class of 2013 to the audience.

Odessa Wauneka directed the changing of the tassles for the class,.Isabella Robbins gave a final thank you address. Imelda Torres gave the benediction.