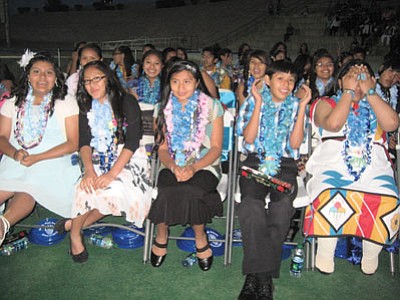 POLACCA, Ariz. - LaNeal Pewewardy spoke about the importance of culture and morals during the keynote address at the promotion of Hopi Junior High students May 22 at Bruin Stadium.

Pewewardy started by playing a drum song and built into a crescendo of respecting elders, parents and veterans. Approximately 75 students were promoted.

Pewewardy, who taught math at Hopi Junior High for four years, talked about his love for his students and teaching.

"I miss this country and land because I was treated great," he said.

"If you have no feeling, you're not going to get your culture," he said.

Pewewardy, who now teaches at Comanche Nation College in Oklahoma, noted that he taught everywhere his daughter went to school from kindergarten through the 12th grade. His daughter Mary Grace now attends the University of Oklahoma. She was an award-winning journalism student at Hopi High.

"Be proud of your religion and who you are," he told the Hopi Junior High students. "When you get in trouble, you move away from your culture."

Pewewardy said everyone's first duty is to protect their community. He added that the purpose of an education is to open minds.

"Surround yourself with good people. That's what opening your mind does," he said.

Pewewardy warned the students that bad decisions can crush their dreams.

"You're all special. There is a place for each of you," he said.

Co-Valedictorian Daniel Lim began his remarks by joking that he no longer feels Korean because he feels Hopi.

Lim said the school year was productive and he thanked all those who pushed him.

"My parents say it's not what you do, but who you do it with," he said.

Lim thanked his teachers, classmates and those who "set up the perfect school." He specifically thanked Hopi Junior High Academic Counselor Kay Lowe for her powerful boost.

Unlike many student speakers, he didn't quote anybody for their famous theories.

Co-Valedictorian Nicholai Bolus commended his classmates for making a big change. He said the past two years were some of the most important years of the students' lives.

"We are teaching dreams for a better world," he said.

Bolus noted that high school will be bigger which means more opportunities for success, but with more cliques and peer pressure to fall into various temptations. He warned his classmates not to seek perfection, but to find their best character traits in order to help others.

"Listen to your parents. Your parents love you and will help you," he said.

Bolus said those who can't get help from their parents should find another trusted adult.

Salutatorian Kyle Secakuku told his classmates that they did not get this far by themselves, so they needed to thank their parents, relatives, teachers and staff.

"Now we have four more years to show what we can accomplish," he said. "Remember who you are: Your tribe, your clan and your family."

Hopi Junior High Principal Albert Sinquah told the students that their promotion was only a step toward their next challenge. High school would come next and then a career.

Sinquah told the parents that the students' success will continue only with their support.

"Don't let the students down," he said. "They do go through trials and tribulations at this point in life."