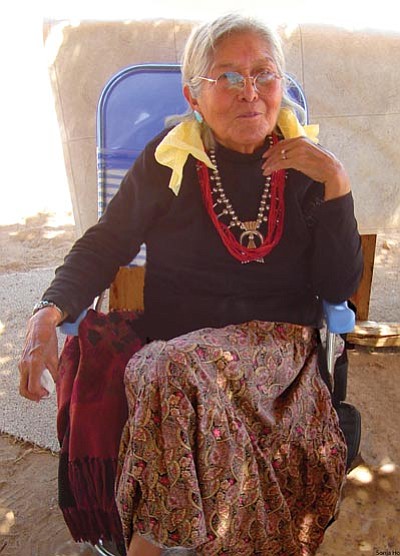 Grace McNeley, educator, mentor and kind spirit, died at her home in McElmo Canyon, Colo., July 25, 2013. She was born in Ship Rock, N.M. to Jessie Dodge and Peter Lee in 1934. After her mother's death from tuberculosis, her paternal grandparents raised her at home in the Ship Rock Farm area.

She remembered her childhood as a happy time when her grandfather plowed in the old way with a big old wooden plow and her grandmother fulfilled the traditional woman's role raising the children and tending to the Hogan. The grandparents were good to children, welcoming other cousins in addition to Grace and her siblings.

When her grandparents died, Grace's two bachelor maternal uncles, John and Chee Dodge adopted her and her siblings, Mary, Juanita and Glen. They moved with the family of children to Rico, Colo, where the uncles worked in the Sulpheric Acid mines there that were producing extraction fluids for the uranium industry.

It was a happy childhood in the mountain community. Mixed into her charming stories about life in the rural school were also stories of the reality of Navajo people working in the mines away from their homes and families. She described clouds of fumes and the noxious aroma that covered the town for long periods of time.

Yet her time enrolled as a student there with her siblings offered a solid foundation for her future. The education she received in Rico was enhanced during those formative years by her Uncle Chee. He greatly influenced the direction of her life, reminding her of her destiny, "You are going to get an education."

By the time Mary and Grace were teenagers, they left Rico, moving on their own to make up new lives in Cortez where they both found employment as cleaning ladies in homes and motels.

As she cleaned and made beds for other people her Uncle Chee's words and guidance rang back to her changing her life forever because she knew it was up to her, now, to get an education.

The advice she sought from the Catholic nuns in Ship Rock encouraged her to attend the St. Stephen's Catholic School in Waterflow, N.M. After graduation she attended Brescia, a Catholic College in Owensborrow, Ky.

Recognizing Grace's intellect and curiosity, the school encouraged her to transfer to the rigorous Loretto Heights College, in Denver, founded in 1891 by the Sisters of Loretto. Grace worked toward an education degree there, but also found her voice. She was a beautiful singer, and at Loretto Heights she had the opportunity to seriously study voice and join the chorus where she performed throughout the region, adding another dimension to her accomplishments.

After graduation, Grace moved to Los Angeles. A few years later she returned to the southwest to pursue her teaching by enrolling at Northern Arizona University for the additional English and education courses she needed.

When finished, she was hired to teach in the elementary school at Tohatchi, N.M.

Grace met her husband, James McNeley, at this time. He was working in Gallup as a social worker. They married at the Catholic Church in Tohatchi and lived in the teacher housing there, where all who knew them agree that it was the beginning of a delightful life together.

Jim's acceptance in the doctoral program in Hawaii took them both to Honolulu. Prior to their departure for the islands, Grace queried the Honolulu Department of Education asking about job opportunities in teaching. She received a strong, negative letter in which a woman from the department told her, "Don't come! There are no positions available."

Intrepid Grace packed her credentials anyway and upon their arrival began a job search applying for work that could help pay the rent, including one at a Chinese laundry where she could be the "ironing lady." After seeing the great piles of sheets and white shirts awaiting her, both she and Jim agreed she should decline. She did and then accepted a more stylish position selling fashionable clothing in a high-end department store in the Honolulu Mall.

Finally, she called the department of education to ask about substitute teaching. According to Jim, when she presented her credentials, the administrator asked, "Why in the world didn't you contact us? We are actually looking for teachers."

It was perfect. It was a public school reserved for native Hawaiian students.

Grace enjoyed her life in Hawaii where she also advanced her singing career by joining the Honolulu Chorale. That activity led to her first acting performance after she auditioned and won a role on stage where she performed dressed in traditional Hawaiian costume, dancing and singing in the musical comedy, "Thank Heaven for Heathens."

Jim notes that he experienced the racial prejudice toward Grace and native people in Gallup before they left for Hawaii. In Honolulu, he adds, Grace felt no prejudice at all and cherished the feeling of equality. She was happily accepted into the multiracial communities of people and as a teacher in the school system.

The high school caught fire, offering an opportunity for Grace to transfer to the elementary school which was also a typical potpourri of students from many cultures. Jim tells us that her students would use "pidgin" English in the classroom, which was a blend of native Hawaiian languages and English.

Her exacting respect for her personal vision was emblematic of Grace's self esteem and the learning she passed on to her students.

Diné College hired her during the second year of its inception when it was still named Navajo Community College.

But the nascent moment in her teaching and education came on a trip they took to Santa Fe where Grace discovered St. John's College. All graduate level students at St. John's study the works of such writers as Plato, Lucretius, Euclid, Descartes, Shakespeare and Nietzsche required in the Western Liberal Arts Program.

Acting on instinct, Grace walked into the admissions office to inquire about the school where an administrator, upon meeting Grace, asked her why she wanted to attend St. John's. "I want to read from The Great Books of Western Civilization so I can learn how you think and then teach it to my people," she answered.

Immediately she was granted a scholarship and admission.

Grace continued teaching English and philosophy at Diné College as a beloved professor and colleague for more than 30 years.

During that time Jim and Grace raised their son, Glen, who says that, "she was a compassionate teacher, so vivacious. The Catholic Church took her in when she was a little girl, encouraged her, nurtured her intellect and gave her opportunities that she needed to become an educator and mentor to so many people, yet she remained solidly a traditional Navajo woman and mother."

In 2009, the graduating class at Diné College asked Grace to deliver their commencement address at the Ship Rock Campus. On that morning, the critical importance of teaching was reflected back to her and she considered delaying her retirement. The cancer that had invaded her bone marrow three years earlier was under control. She felt confident about the future. But the next morning she awakened with a neuropathy that proved to be too painfully debilitating. She resigned her position and remained at home surrounded by the loving presence of her husband, Jim, her son, Glen and his wife Charmain, her grandchildren, many family members and friends.

Throughout her illness she engaged in challenging and enjoyable intellectual conversations with visitors, including, most recently, two retired professors from Diné College who brought boxes of Chinese "to-go" food, spreading a noon banquet on her dining table. Grace stepped up to the opportunity, engaging in a lively discourse, fluidly moving between Navajo and English, quoting Latin and French, smiling, listening carefully to others and offering her wisdom as generously as she did throughout her life.

Grace gently passed away on Thursday, July 25, at home.

She is of the Naakaii Diné'é clan', born for Kin yaa' aanii. She is survived by her husband Jim and son Glen, his wife Charmain, and their four children Mary, Melea, Sierra and Glen Golden McNeley II, bi yáázh Jerry Antone dóó Larry Smiley, and numerous nieces and nephews.

She was preceded in death by her siblings Mary, Glen and Juanita Lee, and her parents.