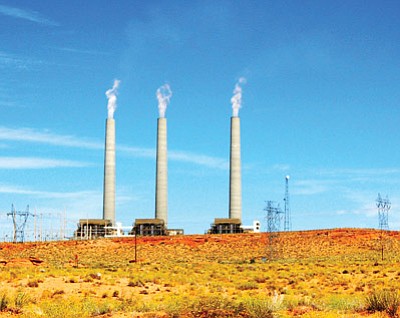 The Navajo Generating Station burns locally mined coal, providing jobs and power for the Central Arizona Project and other services. In the process, it also produces some of the largest amounts of air pollution among power plants in the West.<br /><br /><!-- 1upcrlf2 -->Photo/R.J. Hall via Wikipedia Commons

WASHINGTON - Owners of the Navajo Generating Station offered an alternative plan Friday to what they called a too-costly Environmental Protection Agency (EPA) demand to reduce emissions from the coal-fired power plant near Page.

The plan, submitted to the EPA for review, calls for one of the plant's three generating units to be shut down by 2020, for installation of equipment to reduce nitrogen oxide emissions by 2030 and for an end to coal use by 2044.

It was a response to a proposed rule in February that the plant install equipment by 2018 to reduce nitrogen oxide emissions, a project that critics said could cost as much as $1.1 billion. The EPA encouraged alternative plans and the owners took them up on the offer.

The plan unveiled Friday was drawn up by the Navajo Nation, the Central Arizona Project, the Department of Interior and other groups with a stake in the power plant, along with representatives of environmental groups. They hailed the deal, saying it could save more than 1,000 private-sector jobs and save money for water and power customers.

But others worried that it will not do enough to improve air quality and protect the environment.

He called the proposal a step in the right direction, but said it still delays necessary air-quality improvements like those proposed by the EPA.

The Navajo Generating Station currently emits one of the largest amounts of nitrogen oxide in the West, said Sandy Bahr, director of the Grand Canyon Chapter of the Sierra Club, who was part of the task force but opted out a few weeks ago. That pollution has health implications. Bahr pointed to a Clean Air Task Force report that attributed 16 deaths, 25 heart attacks and 300 asthma attacks in 2010 to fine particle pollution from the Navajo power plant.

The EPA plan would have required the Navajo Generating Station to install catalytic reduction technology by 2018 to cut nitrogen oxide emissions, in addition to other measures.

Instead of that, the plant's owners offered to shut down one of the generators after 2019, when two of the current owners - Nevada Energy and the Los Angeles Department of Water and Power - sell off their shares in the plant. The Navajo Nation would not be allowed to buy up those shares, under Friday's plan.

If those two companies do not get out as scheduled, the unit would not shut down but the Navajo Generating Station would instead commit itself to cutting an equivalent amount of nitrogen oxide emissions between 2020 and 2030.

She said the Sierra Club hopes the generating station will agree to a plan that meets requirements of the Clean Air Act and address pollution in Grand Canyon National Park. There also needs to be a clear commitment - that can be enforced - to clean energy, Bahr said.

"Under any viewpoint imaginable, I think the people of Navajo Nation are in better shape," Hummel said.

Hummel said the EPA's proposal left questions as to whether the Navajo Generating Station would be able to continue operating.

The EPA wanted the power plant to limit nitrogen oxide emissions to 0.055 pounds per million British thermal unit, a level Hummel said is currently impossible at the plant. The alternative plan would limit emissions to a level of 0.07, which Hummel called much more reasonable.

Besides SRP, the plant's owners include the Los Angeles Department of Water and Power, Nevada Energy, Tucson Electric Power, Arizona Public Service and the U.S. Bureau of Reclamation.

Their proposal will undergo technical review to make sure it meets the Clean Air Act, said EPA spokesman Rusty Harris-Bishop. The public comment period is open until Oct. 4, 2013.

"In recognition of the multitude of interests and stakeholders involved, we encouraged interested stakeholders to engage in a robust public discussion," Harris-Bishop said in a statement Friday. "We look forward to reviewing any and all alternatives."