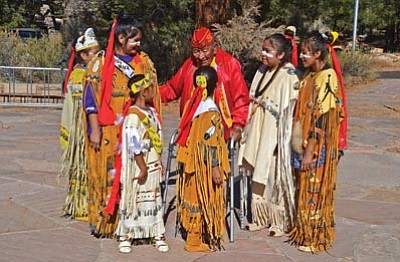 GRAND CANYON, Ariz. - The National Park Service invites everyone to take part in the 20th annual Native American Heritage Days at the North Rim on Aug. 8-9.

This event, which celebrates the rich cultural diversity of the Colorado Plateau, the Arizona Strip and the Grand Canyon, will begin with a morning nature walk on Aug. 8, and will end with a special evening program the next day.

Native American Heritage Days began in 1993 as "Paiute Days," which celebrated the Paiute as the last Native American group to occupy the North Rim of what would become Grand Canyon National Park.

In 1997, the event expanded to include all Native American groups with cultural ties to the Grand Canyon. Today, 11 tribes maintain strong cultural connections to the Canyon.

Throughout Native American Heritage Days, tribal members and non-tribal members will offer special programs on a variety of subjects, ranging from ethno-botany to Native American flute playing and dance. Programmed activities will take place in various locations throughout the North Rim developed area. Visitors can ask for a complete list of event activities, as well as times and locations, at the North and South Rim visitor centers.