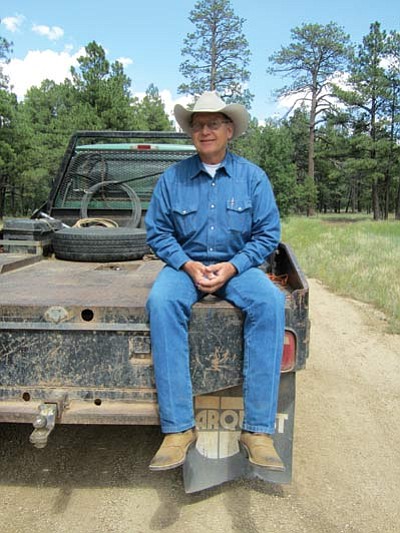 The idea for the Hopi Youth Internship program came from Pat Browning, general manager for the Hopi 3 Canyon Ranches. The program includes workshops with government agencies that are open to students and their families.

Browning said he feels strongly that there should be Hopi working on the ranches owned by the Hopi tribe. He realized one way he could make sure that the next generation had the skills needed was to train them himself with the other cowboys on the ranch. He chooses mostly high school graduates who are ready to make a commitment to finish what they start.

"I designed the program so they didn't have to have anything or know anything," Browning said. "All they had to have was a good attitude and the desire to do more and do something for themselves."

He provides the kids with good quality horses, saddles, tack and everything else they need to be a working professional cowman. The kids learn how to shoe horses, fix fencing and move cattle. They also learn practical things including how to budget and purchase groceries for a two-week period. Browning expects the kids to keep their camp clean, their trailers in good working order and their tack and equipment in excellent condition and to take care of their horses and themselves. The kids also learn how to interact with government agencies and the outside world off the Hopi mesas.

"They are learning responsibility on many different levels," Browning said.

But he stressed the internship is about more than just the cattle work. It is about being a caretaker for the land. He believes Hopi youth have a head start in that area because of their culture.

"The land and community are two of the most valuable things they have and they truly believe that," Browning said. "That's why I get along with them so well, we're care takers and what a noble profession that is."

One of the important aspects of the program is Browning's ability to use his own network from his 42 years of managing ranches in Arizona to serve the kids. He brings in experts from Arizona Game and Fish, the Arizona State Lands Departments and the U.S. Forest Service, among others, to share their knowledge with the kids. While the program is just for the kids, any interested student or their families can come to the workshops.

What Browning hopes is that this network of people will help the kids in the future by expanding their own network of people they know from different agencies that work with the land. In the present, Browning hopes that providing information about what each expert does in their day to day jobs and what sort of education it took to get there will help those participating in the internship determine what they want to do in the future.

Already, the kids have expressed interest in game and fish, fire and the forestry department.

Myles Thomas, a full-time working cowboy on the ranch, said the program is a way for the youngsters to get a start right out of high school.

"I think it's really great for them, it's just a matter of them taking the opportunity," Thomas said. "But also, the sacrifice when they could be doing other stuff throughout the summer, they made a commitment that they want to do something and being out here, being around wildlife, I think it's good for them to get an idea what it's like."

There are four boys in the program, Rex Yellow, Bryan Sinquah, Craig Grover and Joseph Whittington.

April Pavinyama, a former Miss Hopi, is also an intern and is learning how the program managers run the ranches. She said her father works in the office of range management. Volunteering in his office helped her decide to change her focus at Coconino Community College from early education to environmental science.

She said the professional from the Arizona Lands Department shared the classes he had to take in range management, plant identification, biology and chemistry. It was daunting but Pavinyama is still inspired.

"I was sitting there thinking, 'it's going take me awhile,' but I'm going to get there," Pavinyama said.

While the program is paid for out of the ranch budget, the Department of Natural Resources for the Hopi Tribe contributed $25,000 to the internship program and Browning and his wife Mary cover some of the expenses when necessary. At the end of the summer, after the kids complete the program, they receive $5,000 dollars to invest in their future, toward classes, or a good quality horse or two. Browning said he is always looking for new money sources because he would like to expand the program and be able to have more kids in the program each summer.

Next year, he hopes to have a girls camp with a woman chaperone, counselors and mentors. The program will be the same work for the girls and the boys, working with the cowboys all day, moving cattle, fixing fences, shoeing horses and the same workshops.

"As an oversight, I had no idea, I wasn't sure we could get four boys who were ready," Browning said. "We had 28 qualified applicants between the two schools (Winslow High and Hopi High)."

A lot of those qualified applicants were girls but Browning said he could not arrange the isolated camp in a way that would be suitable for both boys and girls this year.

Perhaps the most important thing that Browning gives the kids in the internship program is his time. He said he tries to spend quality time with them and explain to them that part of life is finding something that makes you happy and then finding someone to pay you to do that.

That is what he has done for most of his 60 years.

More workshops in August and September are available to interested students and their families.

The workshops are given through the generosity of the Natural Resource Conservation Service, Arizona Game and Fish, Arizona State Lands Department, the University of Arizona Agriculture Extension Service, the U.S. Forest Service and the Society for Range Management.

Hopi 3 Canyon Ranches is one of the enterprises owned and operated by the Hopi Tribe Economic Development Corporation.

More information about the intern program and the workshop schedule, or information for providing support, is available from Pat Browning at (928) 587-5571 or pbrowning@h3cr.com.