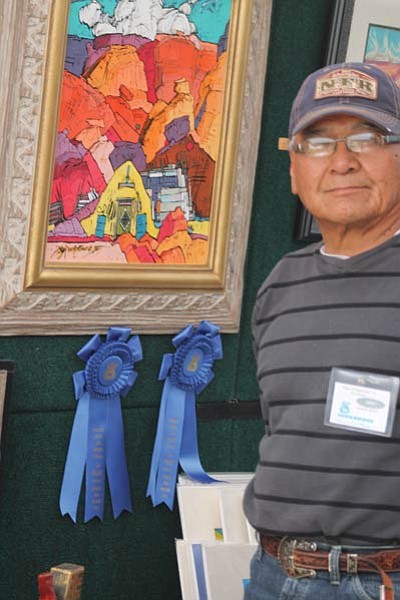 PRESCOTT, Ariz. - Baje Whitethorne Sr., Tim Washburn and Rena Begay never get tired of winning awards for their art. They were among the top prize winners July 13-14 at the Prescott Indian Art Market.

The winning rug is in the third phase Moqui Chief Blanket style. The colors include maroon, purple, black and white. She worked on the rug for seven months, while working on other pieces at the same time.

Begay starts early in the morning, works until 5 p.m., takes a couple hours off and works late into the night. Her entire family weaves, but she learned the most from her late mother Marie Begay.

Begay previously won Best of Show at the Gene Autry Museum in Los Angeles. She continues to live in a traditional hogan in Pinon and sells from her home.

Tim Washburn, a Navajo sculptor, won first place in the sculpture division for his sculpture "A Mother's Weaving."

Washburn said the weaving has no relation to Begay. The sculpture depicts a grandmother holding up her weaving with a dog standing below. The sculpture is alabaster with some natural orange in it.

"I get used to it," he said about winning.

Washburn is a quiet, but confident artist. His recent sculptures include a line of animals including bears, eagles and horses.

Washburn, a member of the Indigenous Sculptors Society, has a studio in Kirtland, N.M. More information is available at (505) 598-9728.

Navajo artist Baje Whitethorne Sr. won first place in the two dimensional art category for a colorful painting of rocks by the San Juan River. Whitethorne is known for lots of color and this acrylic is no different. It includes orange, brown, green and white. The painting captures cliff dwellings and various rock formations.

Whitethorne has been making award-winning art for more than 40 years.

He graduated from Tuba City High School and attended Northern Arizona University, but learned his painting and sculpting skills mostly from his brothers and uncles. He also drew inspiration from his mother, weaver Alice Bartlett.

Born and raised in Black Mesa near Shonto, he has lived in Flagstaff for more than 30 years. More information about Whitethorne's work is available at www.bajewhitethornesr.com

Carlos Laate, Zuni, said he was greatly honored to take first place in the pottery division. His winning piece is white, black and brown in the rainbird design. The design includes four birds, rain clouds, water, snow and vegetation. He has been working on this art form for 24 years.

"I tried silversmith and carving, but I found I could do anything with clay," he said.

Several of his relatives are potters and taught him the craft including his grandmother Daisy Hooey and aunt Jenny Laate. He will display his work at the Smoki art show in Prescott and the Zuni Market in mid-August.

Alfred Joe, a Navajo artist, won the top prize in the jewelry division.

Joe is a longtime jewelry creator and his work can be found in several galleries.

Joe majored in construction engineering at Northern Arizona University but also took art classes there and that is what got him started creating his jewelry. His brother Larry and sister Rita are also jewelry artists. His son Bryan and grandson Derek have also learned the craft.

Born and raised in Dilcon, he graduated from Winslow High School.

The Indian Arts and Crafts Association has twice chosen Joe as Artist of the year.

Usually, there is only one People's Choice winner, but this year Black Eagle and Randy Keedah Sr. both took the honor.

"I'm excited because it's a big honor because of the high caliber of artists here," Black Eagle said. "This is a super great honor. I won People's Choice four or five years ago. I'm so happy I'm at a loss for words. This show is always fantastic."

Black Eagle creates breastplates, weapons such as knives and tomahawks, rattles, teepee knockers, masks and shields. His creations have been used in movies including a contemporary spirit warrior mask.

Many of his creations come from dreams. He draws from personal experiences, research, his family and ancestors. His concepts revolve around the importance of living with nature.

He resides in Mountain Ranch, Calif., near the western slopes of the Sierras, but he was born in Elko, Nev., and lived his first two years on the Te-Moak Reservation in Lee Moak, Nev.

He spent the next 18 years on the Tule River Reservation in central California. The deep forests of the Sierra Nevada provide him with solitude and opportunities to learn about himself and his place in nature.

More information about Black Eagle's art is available at www.warriorart.com.

"I'm very grateful. This is my fourth People's Choice Award," he said. "The award makes me humble and gives me motivation to keep going.

His story touches people because he was born in Steamboat, but his father left his mother before his birth and his mother abandoned him when he was two weeks old. His grandmother found him and his grandparents raised him. He grew up on a sheep ranch which gave him a love of mother earth, the American Indian people and western life.

Like many at that time, Keedah was sent off to boarding school in Utah. By the age of 14, he was drawing three-dimensional art. As a freshman, his teacher let him sit in the back drawing horses and other special projects while the other students learned the basics. He won the Outstanding Art Student of the Year as a freshman.

While in high school, Keedah found a book by Charles Russell and "fell in love with his art." Later, he discovered Bill Owen's work on the cover of Western Horseman magazine. He became enamored with western cowboy art.

Keedah went through a bout with alcoholism and became homeless. But through his belief in the Lord and support of his second wife, Colleen, and other people he has been sober for 21 years and returned to his art.

Keedah loves painting horses, but he also paints Navajo girls. His goal is to make colors, land and people come alive in his paintings. He paints only peaceful and happy scenes.

More information about Keeda is available at www.keedahArt.com.

Sharlot Hall is located two blocks west of the courthouse plaza at 415 W. Gurley St., Prescott. More information is available at (928) 445-3122 or at www.sharlot.org.