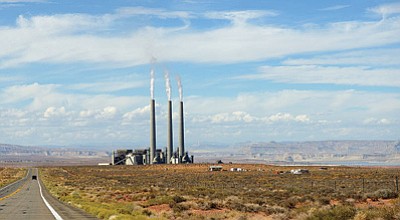 Speaker Johnny Naize had urged the council to approve the agreement to keep hundreds of jobs for Navajo people NGS employs and millions of dollars in annual revenue for the Nation.

The approval of the lease extension previously stalled because the power plant's owners could not agree to all of the Navajo Nation Council's April 29 lease amendments.

"The owners of the Navajo Generating Station are pleased and thankful that the Navajo Council has voted to approve legislation that would extend the lease for this important Arizona resource," said Mike Hummel, Salt River Project (SRP) chief power system executive. "We are currently reviewing the amendments that were included in the final vote, but the initial indication is the amendments are acceptable."

One amendment that was originally made to the legislation was a concern for the owners. That amendment was that the owners may not interfere with or oppose a Navajo Nation claim to water from the Upper Colorado River Basin. The owners had said a future claim could have a direct affect on NGS owners and their customers so they would not waive their ability to oppose any future claim.

In Thursday's legislation language was again added to ensure that NGS non-participating members will not oppose the Navajo Nation in its pursuit of claims to Arizona's 50,000 acre-foot allocation of the Upper Colorado River Basin.

"This will help our attorneys fight to get our water rights," said Russell Begaye, council delegate. "We're only asking that NGS not get in the way of our water claims, we're not opposing the NGS."

"We don't want the owners of NGS opposing our water rights," Delegate Tsosie said. "Let's send this back to them, and make a strong stand once again."

Scott Harelson, from SRP, said negotiations for the lease extension have been going on for two and a half years with a lot of give and take from both parties.

The owners have already agreed to many of the changes the council made, including modifications that require NGS owners to work with Navajo-owned businesses when possible and to provide additional ground cover over the ash landfill when the plant is decommissioned.

"The owners and the Navajo Nation will continue working together to address the other necessary approvals such as the Environmental Protection Agency's Regional Haze rules," Hummel said.

Prior sticking points listed below had made it impossible for the owners to accept the changes after the April 29 vote on the lease extension.

"There are some amendments that have been tacked on to the legislation by the council, some of which the owners have accepted," Harelson said. "But there are a few, we've been very clear, and we were clear before they voted on them, that we could not sign."

Specifically, the owners said that requiring the Bureau of Reclamation (BOR) to be a signatory to the lease was unacceptable because neither the United States nor the BOR was a party to the lease and any references to the U.S. or any of its agencies must be removed.

Also, the council wanted acknowledgment that the U.S. contractual interest in NGS is in direct conflict with the trust responsibilities to the Navajo Nation. The plant's owners said this item would prevent the secretary of the interior from approving the amendment, once the National Environmental Policy Act (NEPA) is approved five years from now - a risk that the owners were unwilling to accept.

The council had also added a provision that the owners may not interfere with or oppose a Navajo Nation claim to water from the Upper Colorado River Basin. The owners said a future claim could have a direct effect on NGS owners and their customers so they would not waive their ability to oppose any future claim.

The council had amended the legislation with a condition that SRP annually meet with the Navajo Nation. SRP officials said because they cannot require the Nation to meet with SRP, they could agree to this provision.

The legislation sought to require the federal government to pay a portion of the signing bonus even if the secretary of the interior never approves the amendment. The owners said that because the federal government may not make a payment for its share of the signing bonus, if the amendment was not approved, the U.S. would be unable to commit to making a payment on something it may never approve.