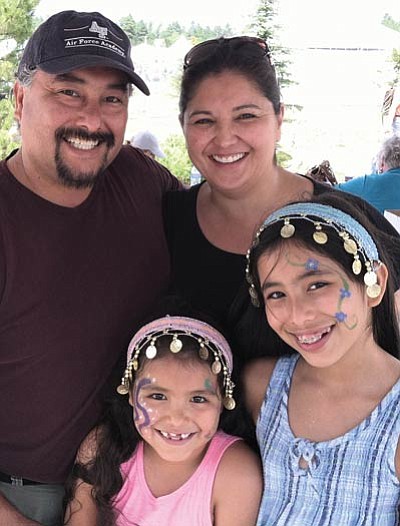 It wasn't until they were grownups, married and on their own, that Navajo couple Duane and Traci Harvey began to explore in earnest the other side of their family history; the Scots/Irish side.

As they strolled the grounds of the Arizona Highland Celtic Festival on Sunday - their seventh or eighth in as many years - the Harvey family stopped to talk about their dual heritage.

The reason they waited to learn more about their Scottish and Irish sides, they said, was that while growing up on the reservation it was not easy being different. Duane's mother and grandmother are both Scots/Irish and Traci's father is Irish

"On the reservation it is definitely a tough time for an individual with that heritage," said Duane. "The hardship was felt more by my mother and sister. I actually was able to fit in with the Navajo culture because I have dark skin but my older sister had a harder time. You feel alienated if you look different. You stand out. It makes a huge difference how children treat you growing up. In junior high it can get vicious. (You) key in on the sets of coping skills you develop. You can definitely grow from it."

"For example, many lost their language, their culture and even their names. That was true for native people," she said.

Traci works for Northern Arizona University as assistant director of inclusion and multicultural services, helping students to navigate, and be successful in, a diverse environment. Duane is a surgical assistant. They have raised their four daughters, ages eight to 19, in Flagstaff and sendthem to public schools.

"Our younger daughters aren't really thinking about their ethnicity and heritage just yet," said Traci. "We're teaching them to just be themselves. We're showing them about their different backgrounds and that theirs are something to be proud of. They do show an interest in step-dancing and in the Irish fiddle."

Traci added that usually her three brothers and their families will join them at the festival, but that this year schedules didn't work out.

Duane said although his own mother did not look "completely Navajo," she knew well her Navajo language and traditions.

"When I introduce myself I do so in the Navajo way; my name and my mother's clan," he said.

As he told a story of an older woman he met by chance at a conference in Minnestoa, Duane choked up.

"She asked me what I remembered about my grandmother. When I told her, she told me that she knew her! And that they had worked together in my grandmother's leather and saddlery side business. She told me that my mother worked tirelessly at more than one job to support us," he said.

His eyes filled with tears at the memory.

Duane and Traci each said that the Celtic festival is a way to introduce their daughters to their Celtic heritage. "From an Irish perspective this particular event has a heavy Scottish focus," Traci said. "But it's a place to talk about heritage. For example, one thing my father always pointed out for sure is that, 'You're Irish. You don't say White. You're Irish.'"

Duane underscored this by citing what he called limitations of the Navajo language. "There's no word for Irish or Scottish or German," he said. "Just White."

Traci has traced her Celtic roots through Xenia, Ohio, where her father lived, and back to southeastern Ireland.

"One of my dreams," she said, "is to go to southern Ireland and learn more about my family."

Both parents see no downside to learning and sharing the truth of where they come from.

"When I look at our daughters and their world," said Duane, "we're trying to develop an overall sense of pride and to allow them to express that; to choose where they want to live and what careers they want to pursue."

Recalling her own upbringing on the reservation, Traci smiled.

"I see it two ways, both positive and negative," she said. "You stood out. You were always 'the white kid.' On the other hand, I had a coach who held us in higher esteem because he assumed 'whiteness' meant your family had money. It worked both ways. For me personally, I feel we belong to the Navajos as well as the Celtic clans."