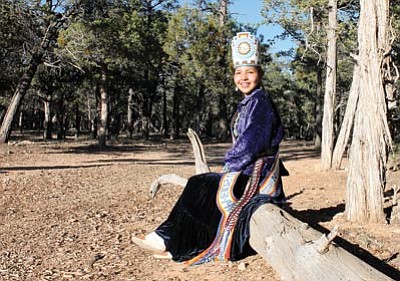 After competing against five other girls from all over the Navajo nation, Augustine not only won Most Photogenic, but also secured the crown.

"It's only been two months, but it's been amazing so far," said Augustine, who was former Miss Ramah Navajo Princess.

Augustine and her fellow Miss Teen Navajo contestants took the stage April 20 prepared to perform both a modern and traditional skill and talent.

Augustine grew up on a ranch, so her modern talent was roping. She chose singing as her traditional talent. The 17-year-old composes all of her music and has recorded two albums, "Songs From My Heart" and "My Songs."

Augustine is fluent in Navajo, and ran on a platform based on helping Navajo youth, ranging from toddlers to teenagers, re-grasp their language. Her family is traditional and makes sure she speaks in her native tongue when she's home in Ramah, New Mexico.

"Because on the Navajo nation our language is almost forgotten," Augustine said. "No one really understands it or talks Navajo, especially the youth. That's what I want to help bring back."

As Miss Teen Navajo, Augustine has almost every weekend booked with a function. When Augustine goes to Navajo events to teach the language, she plays games and hands out prizes to those participating.

And when she's not helping others learn the language, Augustine educates young Navajos and their parents about traditional culture, so they in turn can pass on that knowledge to their children.

"For example when you see a coyote cross the road you have to stop," Augustine said. "You can't go past it until you see another car coming the other way and then you can go. Or how you have to pray early in the morning to our holy people. You can't sleep in until 10 o'clock. It's not good, you'll grow old fast."

Imparting knowledge about the tribe's culture and language is important, Augustine said, adding those generations before her believed in a certain way of life, but now, not many people know or understand why it's necessary for the survival of her tribe.

"I have a message for the youth," she said. "Please be safe and don't do drugs, it won't get you to your goals. Always dream big. Please learn your language and your culture. Please learn where you come from."

When she graduates from high school, Augustine plans on going to a community college in Tucson and then onto the University of Arizona. And in a couple years, she plans to compete for Miss Navajo Nation.