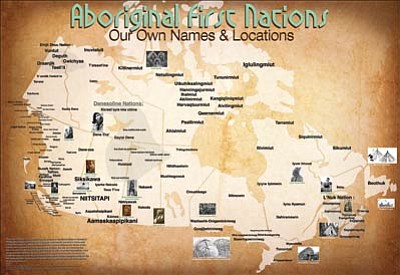 Aaron Carapella spent 14 years making a unique map that reflected the true names of Native American tribes across the continental United States before they had contact with Europeans. Now, he has finished a similar map of Canada's tribes.

Carapella used the same layout and design for both maps. The maps are available with or without borders and as one full large wall map or separately on Carapella's website.

The new Canadian map will reflect how diverse native cultures are. Pictures show people dressed in different styles and show dwellings that are completely distinct from each other.

Carapella, who is part Cherokee, said he had an interest in history in general and in native history in particular - especially his own. He asked personal questions of himself and others: what does it mean to be part Native American when you are living in the city, and where did my family come from? Those questions led him to a desire to learn more about different tribes.

One thing struck him as he learned about different tribes from friends and from books. The names in the books were different than the names his friends sometimes gave and vice versa.

"Sometimes they'd tell me that name is actually derogatory but that's what everyone calls us," Carapella said.

According to Carapella, the Sioux' real name is Lakota, which means the allied people, or the unified people. But their common name is Sioux, which is a derogatory mix of French and Objibwe that loosely translated means the snake people, which can mean people who are tricky.

"A lot of people call themselves Sioux, but if you ask them if they like that name, they say no, I'm not really Sioux, I'm Lakota," Carapella said.

Carapella doesn't know the percentage of the common names of tribes that non-natives gave them but he said enemy tribes were sometimes the ones who gave another a name without a positive connotation.

"Some of the names mean the aggressive ones or the warring ones or the scaredy cat ones," said Carapella. "Of course people from that tribe aren't going to want to be called that."

The job of finding accurate names wasn't an easy one. About one-third of the tribes have their real name listed on their website with a translation of the name but 25 percent are not listed anywhere. To get an accurate name from those tribes, Carapella had to speak to tribal sources. Sometimes he couldn't find an obvious person to answer his questions. To further complicate matters, in some instances, native speakers have died and with that loss is the loss of the true name of the tribe.

"This map would look different in 50 years because there would be fewer people who can identify some of the names," Carapella said. "One hundred years ago, this map would be more accurate because in the last 100 years a lot of people passed away who would know the names."

The maps are not without controversy. He says he receives calls constantly from people who say he has forgotten their tribe.

"The map gets updated constantly," Carapella said. "Sometimes I used names that were available at the time, when no other information was available."

Carapella said people ask why he didn't include Alaska since it is part of the U.S. but he says that the size of Alaska made it almost impossible to include with the first map.

"Look at the size of the map already," Carapella said. "Where was I going to put Alaska unless I made the thing as large as the whole wall?"

But he is still considering adding Alaska to his collection of maps along with Mexico. And he also is thinking of starting a detailed map of California which will break down the larger groups of tribes into their smaller villages of about 20 people and list them separately instead of the interlinked tribes that are more common now.

Carapella also said peopel have asked why he is creating indigenous maps from pre-European times that show modern state lines. He explained that he wanted to make the maps accessible to educators who find that common names help people place tribes more easily for students.

"I personally, because I am so into history, don't even recognize the border," said Carapella. "Whether or not it's the Mexican side or the Canadian side, every single one of those tribes along the top or the bottom perimeter of that map crossed over into the other country before it was ever that country."

More information about Carapella and his maps can be found at aaron-carapella.squarespace.com.