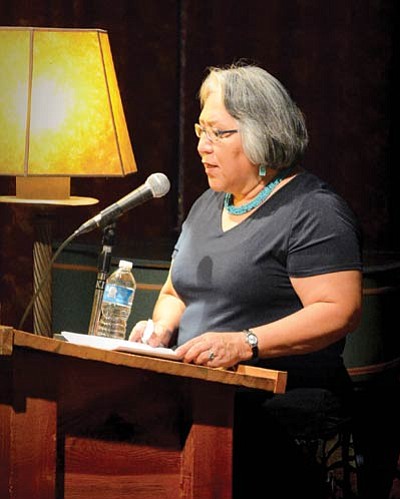 Yazzie is from the village of Hardrock on the Navajo Reservation. She teaches and writes as a way to honor her elders and parents for their cultural, educational and historical gifts bestowed upon her as a Navajo. Yazzie is an award winning author of a bilingual children's book and co-author of a Navajo language textbook for college students.

She spoke at the Winslow La Posada Hotel. The event was free and well attended with more than 100 listeners.

Yazzie began by detailing the Navajos' historical conflicts with earlier interlopers into Navajo lands, prefacing their relocation by the U.S. Government in 1863-64. The Long Walk is also referred to as the Long Walk to Bosque Redondo. Led by Kit Carson, 8,500 Navajo men, women and children marched 400 miles from northeastern Arizona to a barren tract named Bosque Redondo. It was a site named for a grove of Cottonwoods on the Pecos River in Eastern New Mexico. The U.S. government had grand plans to "americanize" the Navajos here and teach them modern agriculture.

The site was ill-suited for the planned purpose. Redondo failed.

In 1868 the U.S. gave the Navajo people sovereignty over their original Arizona lands and released them to return home. Later the U.S. government issued the Navajo People rations and sheep, allowing them a chance to regain some of their former prosperity, health and dignity.