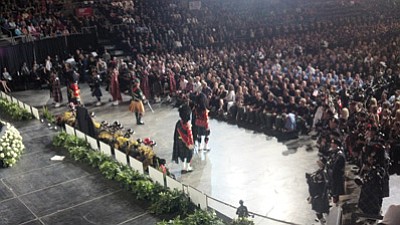 A crowd of 6,000 gathers July 9 at Tim’s Toyota Center in Prescott to honor the 19 Granite Mountain Hotshots that died June 30 fighting the Yarnell Fire. Photo/Sam Espinoza

By honoring the 19 Granite Mountain Hotshots who died on the Yarnell Hill fire June 30, a July 9 memorial helped begin the healing process for the community of Prescott, Yavapai County, Arizona and the United States.

"America will continue to be defined by the 19," Vice President Joe Biden said at the memorial. "Nineteen ordinary men who did extraordinary things.

"There's an old saying: All men are created equal, and then a few became firefighters," Biden continued.

"Thank God for you all."

Prescott Fire Department Engineer Dan Bates said he struggled with the question, "Why?"

But then he thought about how they helped save Prescott from the Indian fire of 2002 and the Doce fire this year, saved a world record alligator juniper on top of their namesake Granite Mountain during the Doce fire, cleared vegetation and educated the public during the off-season, and lastly, gave their lives trying to protect the southern Yavapai County community of Yarnell from wildfire.

He concluded God brought the men to Prescott for a reason.

"There is always a threat of a risk," Prescott Fire Chief Dan Fraijo said. "This is a business fact that we all accept. (The Hotshots) never complained, they always went out there and did their job the best they could... it was simply a job they were going to do."

Bates dubbed them the "Saints of Prescott."

"Our Saints of Prescott were not boastful men; Hotshots never are," Bates said. "They worked deep in the woods, removed from the public eye, far from the headlines."

Tim's Toyota Center was filled to its capacity of 6,000 July9 while thousands more watched outdoors, at Yavapai College and on television.

"In this profession of ours, we have two families," Schaitberger said: a family at home and a family of firefighters. "But today, we're all one family."

It was a ceremony fit for heroes, with more than 200 firefighters' pipes and drums, the Greater Arizona Congress Choir performing traditional songs, and the gear of the fallen firefighters lined up in front of the stage alongside their photos framed in the colors of the flag.

Wreaths lined the center's hallways, and mourners posed outside with a wildland firefighter statue sent by Boise firefighters. Behind it were purple ribbon-draped flags for each of the fallen 19. Red Cross volunteers even posed with the statue, after spending the day handing out water and pamphlets with advice about how to handle grief.

Tears were plentiful, especially when lone surviving Granite Mountain Hotshot Brendan McDonough read the Hot Shot's Prayer, and when the family members of the other Hotshots were given flags flown overthe state and U.S. capitols, bronzed Pulaski wildland firefighter tools, and International Association of Fire Fighters Medals of Honor.

"I miss my brothers," McDonough said after the crowd gave him a long standing ovation.

Prescott Fire Department Wildland Division Chief Darrell Willis and other local fire managers honored the fallen heroes by wearing the same dusty gear they wore the night of June 30, as they guarded the Hotshots' remains where they fell just west of Yarnell.

"I would have followed them blindfolded to the very place they were at," Willis told those gathered at the memorial.

The Hotshots all were his adopted sons, said Willis, who helped create the crew.

He recalled how he joined them in hiking up Storm King Mountain in Colorado a few years ago, the site where 14 wildland firefighters lost their lives in 1994.

"They were truly committed to never letting something like this happen again," Willis said.

Once they were known as the only U.S. interagency Hotshot crew organized under a city government.

Now the 19 Granite Mountain Hotshots hold the grim record of the highest wildland firefighter death toll on a single wildfire since 1933, when 29 untrained firefighters died in Los Angeles.

Prescott's Hotshots died when an early monsoon storm system suddenly shifted the winds and trapped them in a rugged basin just west of Yarnell.

"They were 19 heroes, gone at the turn of the wind," Gov. Jan Brewer said.

"They were heroes long before we knew their names," Biden added.

He recalled how firefighters saved the lives of his two sons in a car wreck, saved his life when he had a cranial aneurism in a snowstorm, and saved his home. "They saved my guys, saved my life," Biden said. "They saved my home when lightning struck."

Dozens of former Granite Mountain Hotshots sat in front with the Prescott Fire Department, while representatives of all 109 of the country's other Hotshot crews sat together to the side. Firefighters and police officers from throughout the country came to pay their respects, some of them volunteering to help outside while standing motionless in their blues in the baking sun.

"There are 110 Hotshot groups in the nation, and some representation of each is here today... and venture most of the states are covered too," Memorial Incident Command Team spokesman David Eaker said before the ceremony.

One such contingent drove eight hours to be at the ceremony. Capt. Phil Corsi of the Ventura County (Calif.) Fire Department said they came to say goodbye to their fellow firefighters. "Obviously, they paid the ultimate sacrifice. Those 19 men's deaths is horrific and we wanted to pay our respects," Corsi said. Firefighting is a brotherhood and the 19 have fought side by side with Corsi's men, he added.

Corsi said that where he lives in California they have three wildland hand crews, and one of the crew's entire 20-man team of Hotshots also made the trip this week.

Toward the end of the ceremony, bells rang to signify the Hotshots' final alarm.

Later that afternoon, at the same time of day that the Hotshots perished, Prescott's emergency dispatch center repeated that final alarm, naming each of the 19 firefighters.

"They have completed their last call," the dispatcher said.