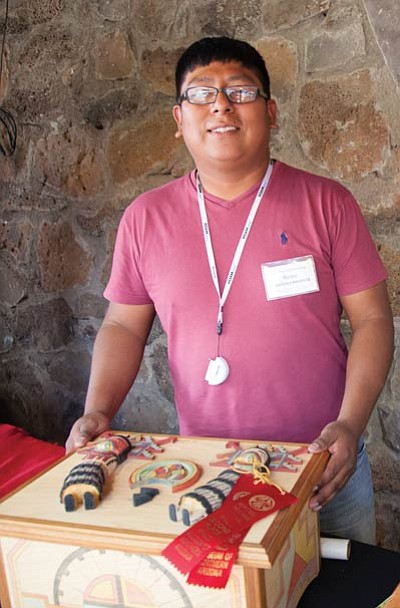 Ryan Gashweseoma stands with an award winning Kachina box at the Hopi Festival of Art and Culture July 7 at the Museum of Northern Arizona. Ryan Williams/NHO

KINGMAN, Ariz. - Hopi carver Ryan Gashweseoma is a union carpenter by trade. When he decided to become a carver, he wanted to do something different and add something more to his kachina dolls.

He learned carving from his uncles and grandpas. Gashweseoma makes custom jewelry boxes made from exotic wood from Africa, South America, Asia, Europe and Australia. He puts the kachina dolls on top of the jewelry boxes and makes different designs around them.

He said that his carpentry background helps him to deal with different types of angles and machines and inlay, all of which help him with his carving.

Gashweseoma said that each box is made after thinking of the dolls first and then looking at different jewelry boxes. He finds a way to combine the two together, incorporating the different designs, different distinct colors and different grains. Having a good eye for matching different types of wood is necessary. He then thinks again of a kachina doll and the story that goes behind it.

"When I think about the kachina, I start thinking about the designs that will incorporate into the box itself with that kachina," Gashweseoma said.

The boxes can take about a week to two weeks to make depending on the size and detail involved. But a five by five inch box would take about two days to make.

Gashweseoma shows and sells his work at different Indian markets across the country. He has work displayed in Sedona and a museum in Los Angeles. He was recently part of the Hopi Fest at the Museum of Northern Arizona in Flagstaff.

He does take special orders from people he meets across the country. Gashweseoma said typically someone will order a specific type of doll after they hear a story that resonates with them. Then he is free to pick whatever wood he thinks will match the doll.

He said his wife's uncle introduced him to the Native markets when he didn't know anything about them. In November he will have been participating in the markets for four years. Gashweseoma finds that the Indian markets are a great place to meet other artists. Many have turned into good friends. The Indian markets also give him the opportunity to share his way of life with people around the country who know little about Native America.

"I like sharing my culture and I want people to recognize who we are and for them to have knowledge about the Hopi people," Gashweseoma said. "I try to teach people about who we are, where we come from and what our traditions are."

He said the recent sale of Hopi sacred objects in France was a hurtful example of people not understanding the Hopi culture.

"That was part of our people and our history that shouldn't have been shared, and it was very hurtful and brought a lot of tears to our Hopi people," Gashweseoma said. "But we have to keep moving forward in this life and keep our heads up so we don't dwell in the past."

Gashweseoma was born in the Village of Moenkopi and went to Moenkopi Day School. He graduated high school at Tuba City High School in 2003. He is the oldest of five. His father and his grandfather are both traditional weavers. His grandpas carve kachinas. He has a wife and a four- year-old daughter.

He has won a number of ribbons and awards and he won first place for fine art sculpture recently.

"It's nice when people recognize your work and how much work goes into it," Gashweseoma said.

Gashweseoma can be reached at his Facebook page by searching for talaviwoodwork or by email at gash_03@yahoo.com.