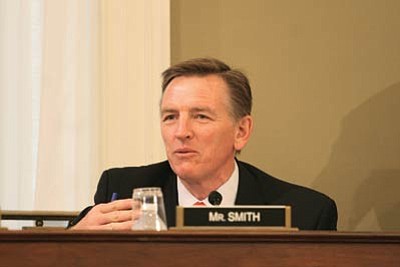 Arizona lawmakers invoked the memory of the 19 fallen Granite Mountain Hotshot firefighters at a hearing Thursday where they urged bureaucrats to improve forest management to prevent such fires in the future.

"I can't look at these 19 families in my district any other way," said Rep. Paul Gosar, R-Prescott, whose district was the scene of the deadly Yarnell Hill fire. "We have got to put this on the table. It can't be tomorrow, it can't be in a month, it can't be a year from now. It's got to be now."

The oversight hearing by the Subcommittee on Public Lands and Environment included conservationists, a lumber industry spokesman and officials from the U.S. Forest Service and other state and federal agencies, and came just two days after a memorial service for the 19 Granite Hill firefighters.

Some worried that the hearing came too soon after the deaths.

"While wildfire and forest management are issues that this committee has an obligation to address, I'd ask for a delay," said Rep. Raul Grijalva, D-Tucson, the ranking Democrat on the subcommittee. "I didn't want the lost lives of these brave men to become part of a tired and predictable debate."

Most of the debate centered on Forest Service efforts - or failure - to manage forests by allowing lumbering and thinning of overgrown woodlands. Several lawmakers and witnesses pointed to successful efforts by the White Mountain Apache to manage forests on their lands, a practice that was credited with halting the 2011 Wallow fire at the reservation's border.

"Congressmen Gosar, Grijalva and I each pointed to the Four Forest Restoration Initiative as a model for tackling a critically important problem," Kirkpatrick said after the hearing. "It's a good sign whenever Arizonans from both sides of the aisle find common ground."

The initiative mandates that officials in the four national forests involved - Apache-Sitgreaves, Coconino, Kaibab and Tonto - agree on plans "to restore the structure, pattern and composition of fire-adapted ecosystems" by reducing fuel for fires, increasing forest health and expanding wildlife and plant diversity.

While most speakers agreed that collaborative management efforts are desirable, conservation groups warned that forest thinning has to be balanced with other issues, such as climate change and human encroachment.

"Climate change is making fires worse. Time is of the essence," said Christopher Topik, director of Restoring America's Forests, a project of the Nature Conservancy.

Topik, like most of those at the hearing, said wildfires will never be completely eliminated, but their impacts can be lessened.

"We all need to learn to live with fire," Topik said, adding that it is "better for our health to have a fire on our terms."

He agreed that collaborative management efforts are probably "the most cost-effective way of reducing harmful impacts to society, while also allowing for enhanced, safe and controlled use of fire to restore wild lands as appropriate." But he cautioned the committee against rushing to act.

Gosar agreesd that initiatives like Four Forest are important, but said there are still fundamental issues, like "problems within the bureaucracy of the Forest Service" that need to be addressed.

"We're almost there," Gosar said after the hearing. "What we need to do is have that little bump from the communities and the victims of these wildfires to make sure that these three groups get together and get it done."