Permanent fix to U.S. 89 landslide near Page two years away
ADOT identifies solution that will cost about $40 million 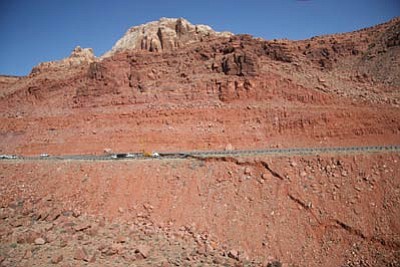 ADOT plans to cut back the mountain slope and construct a gravity buttress wall to fix a part of U.S. 89 near Page, Ariz. a landslide damaged in February. The agency expects the repairs to cost about $40 million. Photo/ADOT

PHOENIX -While the Arizona Department of Transportation (ADOT) has come up with a way to fix the portion of U.S. 89 damaged in a February landslide, the road won't be fixed for at least two years. That means drivers will have to continue to take U.S. 160 (Tuba City exit) and State Route 98, which is approximately 115 miles long and 45 miles longer than the direct U.S. 89 route.

ADOT plans to cut back the mountain slope and construct a gravity buttress wall as part of the proposed solution. The agency expects the repairs to cost about $40 million.

ADOT assembled a team of geotechnical experts to examine the stability of the mountain slope that carried the damaged highway and searching for options available to reopen the roadway.

After an exhaustive geotechnical investigation that included geologic mapping, subsurface exploration and monitoring, laboratory tests and slope stability analyses, ADOT submitted the final report. The 463-page report concludes the recent landslide was a reactivation of a small portion of an ancient landslide, but little to no new movement has occurred since testing began.

ADOT will build the buttress, a wall-like support structure composed of rock, at the base of the slope and will move the highway travel lanes farther to the east by creating a new cut into the existing slope in the Echo Cliffs.

"The recommendation is to move the road 60 feet, and take the rock from the cut and put it at the base of the hill to form a rock buttress to lock in the recent slide," said Steve Boschen, ADOT deputy state engineer of design. "The right-of-way and environmental process will be our biggest challenge, but we will streamline that as much as possible so we can benefit the traveling public and especially the Bitter Springs and Marble Canyon communities."

At a later date, ADOT will request additional federal aid to pay for the repair of U.S. 89 through the Federal Highway Administration's Emergency Relief program, which reimburses state and local jurisdictions for the repair or reconstruction of highways, roads and bridges damaged in natural disasters and catastrophic failures.

ADOT used $35 million in federal aid money to pave Navajo Route 20 to make a shorter detour route for motorists until repairs are complete on U.S. 89.

The Navajo Nation, Navajo Division of Transportation, Bureau of Indian Affairs, the Federal Highway Administration and ADOT all worked together to pave Navajo Route 20, a 44-mile-long tribal route, which is a mostly dirt road that stretches from Bodaway-Gap to LeChee. N20 runs parallel to U.S. 89 and will significantly reduce travel time for motorists heading to and from Page and the Lake Powell.

Workers began construction in late May on N20 and work will likely finish in August. The route will eventually serve as the interim bypass for drivers and will be designated Temporary U.S. 89 (US 89T) once paving is complete.

U.S. 89 is closed north of Bitter Springs and south of Page.