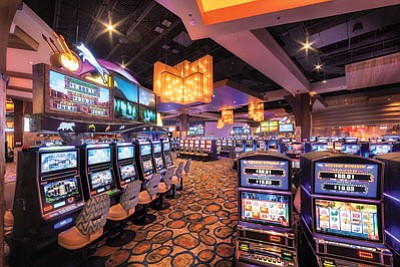 Gamblers at Twin Arrows Navajo Casino Resort will now be able to buy drinks and carry them onto the casino floor. Photo/Twin Arrows

TWIN ARROWS, Ariz. - People gambling at Twin Arrows Navajo Casino Resort will now be allowed to bring drinks on to the casino floor.

The legislation, approved by the Navajo Nation Council on June 28 in a 9-7 vote, applies only to Navajo Nation Gaming Enterprises (NNGE) Arizona casinos. The legislation does not include the three New Mexico casinos because of New Mexico gaming compact that prohibits alcohol on casino floors throughout the state.

Derrick Watchman, NNGE chief executive officer, said he was pleased his request for the expansion was approved and that Twin Arrows will start allowing drinks on the casino floor immediately.

He said the expansion has made it possible for Twin Arrows to compete with other Arizona casinos run by Native American tribes.

"We were getting a lot of customers coming in and saying, why can't I have it here while I play the slot machines," Watchman said. "We wanted to provide our customers the best entertainment experience possible."

Watchman said he appreciates the council and the president for amending the law and that he will do his best to improve his business, which is owned by the Navajo Nation government.

The casino only allows for the consumption of alcohol on the floor but will not sell drinks on the floor at this time. In the future the casino may sell drinks on the floor but for now customers will be able to buy a drink in one of the bars and then they are allowed to bring that drink on to the casino floor to the slot machines. Anything more would require casino management to train servers on how to handle the sale of alcohol and how to handle the cash - something they are not prepared to do at this time.

Delegate Danny Simpson argued that the casino should abide by existing law approved by the council in 2008.

"What's more important, the lives of our Navajo people, or dollars?" he asked. "It seems we are always bowing down to the gaming industry."

Watchman said he does not turn a blind eye to the social ills that allowing alcohol on the floor might bring but said that Twin Arrows holds liquor licenses for both Arizona and the Navajo Nation and there are strict controls and monitoring systems that the casino has to follow. If the casino does not follow those rules, the casino runs the risk of losing its liquor license.

According to Watchman, NNGE employees receive periodic training that allows servers to limit alcohol on an hourly basis and to ensure customer safety.

"My policy and our policy at Navajo Gaming is to serve alcohol but with limitations," Watchman said. "We have to look at their body language, their voice language, if they look like they are impaired, we have to cut them off."

He also said the Nation is looking at whether they should expand alcohol sales across the reservation and that the prohibition of alcohol brings other activities that are not good for the community.

"There is a substantial bootlegging problem on Navajo and so alcohol is on the reservation, it's illegal but it's there," Watchman said. "It is a problem but just like other things, in my personal opinion, we have to understand how to deal with it and see if we can reduce alcoholism."