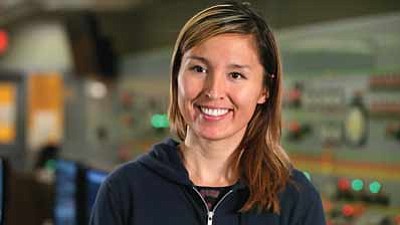 LeCHEE, Ariz. - When Nicole Kee was 19 years old, her aspirations were solely to make life better for her three-year-old daughter.

But her prospects were slim. She had no car, no job, no money and was living in a domestic violence shelter in Page, Ariz., with a toddler.

Nicole grew up with her mother and sister in a remote area of Navajo Mountain, 13 miles from the Inscription House Trading Post and five miles off the road.

Her mother raised her traditionally, hauling water, using kerosene lamps for light and wood and coal for heat.

She attended Shonto Boarding School through sixth grade and the Navajo Mountain School through eighth. She graduated with honors early from Monument Valley High School in Kayenta. She was committed to hitting the books when she learned in her sophomore year she would be a teenage mother.

In order to find some - any - opportunity for her daughter's education and well-being, she passed on going to college and moved to Page.

She earned a little money working at the Family Bargain Center, a used clothing and household store. But she was desperate for fulltime work. She tried to make ends meet with food stamps, the WIC program, and any government assistance she could find.

She asked everyone she knew where she could get a job. "Go out to the power plant," they told her. "Even the janitors make good money."

"So I kept bugging (Human Resources), asking, you know, how do I get a job out here?" she said. "I wanted to show them how determined I was."

She was told all new employees at Navajo Generating Station (NGS) are required to attend and pass a 12-week-long Power Plant Fundamentals School. Entry into the school, however, required successfully passing a series of interviews and a physical exam.

"I applied as soon as they told me about it," Kee said. "I asked them a bunch of questions about how people get into it, what I needed to study. They gave me a couple of answers and told me that I had to be able to pick up a 50-pound bag of dog food, at least. So I went over to Walmart and made sure I could."

She passed the tests, impressed her interviewers with her positive attitude and resolve, and completed the rigorous Fundamentals School as the youngest "Operations & Maintenance I" employee on the plant site at the time.

Nine years and numerous training courses later, Kee, 28, is one of 15 certified operations specialists - all of whom are Navajo - who run the 2,250 megawatt power plant and are responsible for safely producing enough electricity for millions of people.

"I came here expecting them to give me a broom," she said. "Instead they gave me a multi-million dollar power plant. It's just opened my world."

"It's a very important and highly technical job," he said. "You can't take a person off the street and sit them in that chair and have them understand the job. That's why it's important that they go through all this training prior to getting into the control room so that they understand the dynamics of all the systems that they're controlling.

NGS has three 750-megawatt units, each with its own control console with 16 computer screens that monitor everything that occurs within the power plant. Operations specialist trainees must pass a four-week control operator school followed by three to four months on a control room simulator to learn all they can prior to operating the real thing.

"Upon completion of all that, they will be full-fledged control operators and be able to sit out there in the chair," Edwards said. "It takes several years to get to the point where you're in this room here, actually."

"There are thousands of different points and variables just within this one unit," he said. "So much matters. Some things we can do without to make electricity, other things we can't. If one of our major fan bearings gives us problems and we have to shut it down, we're going to have to reduce unit load because the remaining fans won't be able to handle the air requirements for full load."

He said operators constantly monitor what he called "the Big Three - air, fuel and water. There are pump flows, pressures, coal feeders, boiler fans, huge turbines spinning at 3,600 revolutions per minute, pollution controls, emissions ... the list goes on and on."

For these reasons, operations specialists hold a coveted job. Of NGS's 518 employees, 86 percent are Navajo.

"When I was coming up, I looked at those control room operators sitting up here in the control room," Edwards said. "I thought those guys must really know their stuff. They sit in there and they call the shots. They are the boss of that unit. That is their unit and what they say goes."

Nicole mother's Genevieve Kee said her daughter has shown incredible determination since learning she would be a mother.

"I'm just so proud of her, being a single parent at the time, as I was," she said. "She succeeded. She did it all for her little one."

Years ago when Genevieve traveled to Page for her job to support her Nicole and her sister Tammy when they were small, her own parents, Lee and Kay Kee, would look after the girls. Nicole's stepfather passed away when she was 9 and she didn't meet her biological father until just a few years ago, Genevieve said.

But when Nicole was in high school, she and her mother made an important agreement.

"She knew she was going to become a mom," Genevieve said. "I said, 'I want you to finish your education first. I'll help you take care of her.' And I spent the day with my granddaughter."

Today as an operations specialist, life is different for Nicole. She owns two vehicles and a home, helps support her family, enjoys fly-fishing and hunting, and is studying toward her bachelor's degree while working fulltime at NGS.

Nicole said the most important thing people should know about NGS is that safety and cleanliness is highly valued.

"Everything is about safety," she said. "Safety comes first. Always. And you can feel it in the work environment. Every day, at the beginning of the day, we all sit down. We talk about whatʼs going to be happening throughout the day. People really do care about each other. They donʼt want anyone getting hurt out here."

She says she's connected to her co-workers who have become like family.

Most important, though, is that she can provide for her daughter what was out of reach for her growing up. With her job at NGS, Nicole said, she doesn't have to worry about her family being taken care of.

"Before I started out here I was using food stamps," she said. "Itʼs nice to not need any of those anymore. I can't believe that I'm here. I was coming here just for a job. And I ended up in the control room operating various pieces of equipment, making megawatts, I feel like Iʼm setting a great example for my daughter."

Editor's Note: George Hardeen is a communications consultant for the Navajo Generating Station.