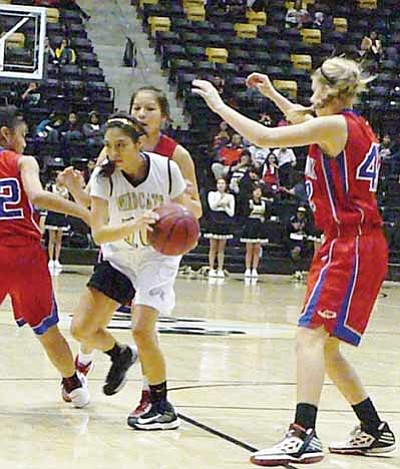 "Our key has been and will continue to be and always be - play as hard as we can," said Chinle Wildcats head coach Steve Troglia.

From the opening tip, the Wildcats contested every pass to cause turnovers. They double teamed every time the Roadrunners got their hands on the ball and, with the home crowd backing the Wildcats, it was a February Frenzy in January.

The Wildcats quickly scored at the start of the game, with a driving lay up by Kevin Yazzie. Searle Tracy added another lay-in to make the lead 4-0. Andon Hatch hit a trey and Miireux Bagaii hit two free throws, opening the scoring for the Roadrunners.

Wyatt Tuni and Yazzie combined for five points for the Wildcats and the Roadrunner's Brandon Bitsui and Hatch tied the game at nine apiece. Then the Wildcats scored 11 straight points to end the first quarter in the lead at 20-16.

In the second quarter, the Wildcats continued to pressure the visiting Roadrunners' play, capitalizing on turnovers and penetrating the paint resulting in six trips to the charity stripe, making seven off 10 free throws.

"We gave them too many opportunities of our miss-cues and they took advantage of our turnovers and scored. Turnovers has been the story of our season, when we would take care of the ball and defend, we are a different team," said Raul Mendoza, Roadrunner's'head coach.

The Roadrunners didn't go quietly. They made small runs of their own, out-scoring the host 15 to 11 to tie the game going into the half at 31.

The pace of the game never let down as both teams continued racing up and down the court. The Wildcats' Tracy, Tuni and Yazzie combined for 11 points for the Roadrunners and took a 42-31 lead they would defend to the end of the game. The Roadrunners' Sheldon Silversmith connected on four straight buckets and Hatch hit a trey.

In the final quarter six different Wildcats combined for 22 points pulling away while holding the Roadrunners to 15 points. In the end, the Chinle Wildcats pulled out a 72-59 win.

"They are going to come out and press us early, we got to shoot the ball well," said the Holbrook Lady Roadrunners coach Greg Perkins before the game.

The Chinle Lady Wildcats got off to an early lead, 4-0, with scoring from Shastikka Iyua and Kristen Begay. The team outscored the Holbrook Lady Roadrunners 13 to 10 in the first period.

Shooting the ball well from behind the arc, the Lady Roadrunners' Brittany Baldwin connected on two treys. Teyah Goldtooth also hit the money ball, Kaynasa Curley scored four points and Starla Smith followed with a lay in for a total of 18 points in the second period. The Wildcats' Iyua scored six points in the paint and Macy Clauschee hit a bucket as the Lady Roadrunners took control of the game, leading at the half, 28-21.

"When you make three pointers, it helps, it gave us a comfortable lead," Perkins said.

The Lady Wildcats were able to outscore the Lady Roadrunners in the third period, down by just four points heading in to the fourth period.

The Lady Wildcats made a final run but were out scored seven to six by the Lady Roadrunners. The Roadrunners eventually eked out a 53- 52 win.

"We were lucky - that shot (with no time left) came within a bounce of going in," Perkins said. "Every game in this conference is tough - they get you ready for the state tournament, we have the best teams in state, coming out of our area."

"We had our opportunities at the end," said Pio. "We got to play four quarters of basketball - little things ended up costing us."