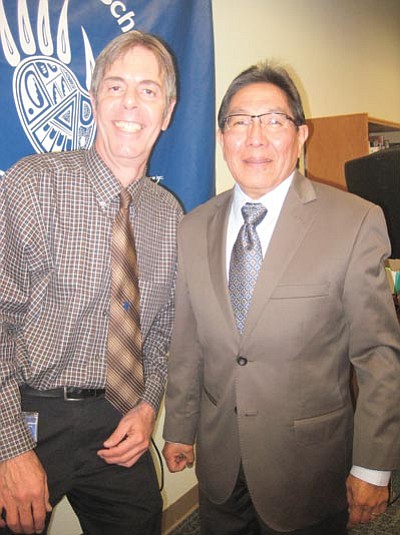 Hopi Vice Chairman Herman Honanie spoke to Hopi High School (HHS) seniors urging them to further their education so they might become doctors, lawyers and teachers.

Honanie, speaking to the students in the HHS library Jan. 14, told them to dream big and pursue their goals.

"Never underestimate yourself," he said. "Keep your sights in mind and be focused. Nobody should tell you it's too hard."

Honanie told the students they should use technology to succeed. He noted that there is a lot of unemployment on the Hopi reservation because of a lack of jobs and a lack of college training. He said to get hired, applicants often need a college education.

Honanie, 57, said he is proud that his wife, his youngest son, his daughter and himself all graduated from the University of Arizona. He earned a Bachelor of Arts in political science. His oldest son is in the Navy.

"Once you get an education, nobody can take it away from you," he said. "We need to come back to be doctors, lawyers, teachers, but it will take a lot of hard work, which is why it's the greatest feeling in the world (when you accomplish it)."

Anna Masayesva, staff assistant to the vice chairman, told the seniors that she was in their shoes about 15 years ago. She recalled that Hopi High Principal Glenn Gilman was once her social studies teacher in junior high.

Masayesva asked the seniors how they will contribute to their community. She said the Hopi reservation needs plumbers and mechanics for those who want to go to trade schools.

"Remember you're responsible for what you do," she said.

The students responded positively to the vice chairman's advice.

"He said things that I always hear from my parents and grandparents," Harding said.

Harding is considering majoring in musical engineering or animation.

Lorencita Qumyintewa said she is considering joining the Army or Marines or going to culinary school. Her long-range goal is to become a doctor or lawyer.