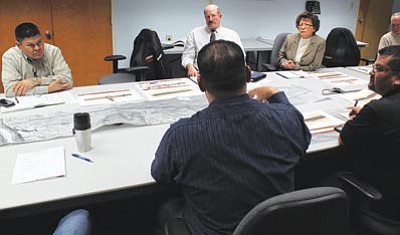 Navajo Division of Transportation Director Paulson Chaco listens to a presentation from David Benton, Arizona Department of Transportation (ADOT)project manager. ADOT is proposing an Intergovernmental Agreement with the Navajo Nation for a new $35 million road project in Cameron. Photo/Rick Abasta

ADOT requested an intergovernmental agreement (IGA) with the Navajo Nation to provide maintenance of sidewalks and underpass lighting for the project. The $35 million project is subsidized by federal money. ADOT's timeline has the project bid-ready by February to meet federal money allocation deadlines.

The group reviewed renderings of the proposed underpass access (including lighting) and a roundabout interchange.

The corridor will also have eight-foot sidewalks on both sides of the roadway, including an eight-foot offset from the curb, which NDOT would maintain, according to the IGA.

Construction plans include a roundabout interchange at the intersection of SR 64 and U.S. 89, multiple driveways with three underpasses and a new bridge structure at the Little Colorado River.

"The existing steel truss bridge will be replaced with two new separate concrete girder bridges," Benton said. "The bridges are six spans with two columns on each bound that are replacing the existing structure. The historic cable suspension bridge will remain and will continue being utilized for a gas line."

ADOT will add or relocate the fence through a major portion of the project to the correct right-of-way location. Benton said the fence is currently inset toward the roadway and not placed at the correct locations along the right-of-way.

According to Benton, some home site leases encroach into the ADOT easement near the Cameron Chapter House. Because of this, ADOT made changes to the development plan to keep impacts to those leases minimal.

ADOT plans to offset the fence and move around the home sites and build a home retaining wall for safety. The entire corridor will have ADOT lighting.

Benton said the IGA would require NDOT to provide maintenance of three pedestrian underpass sidewalks and lighting and maintain sidewalks running south of the Cameron Trading Post to the SR 64 intersection.

NDOT Director Paulson Chaco said authorization of the IGA would require oversight approval from the Resources and Development Committee of the 22nd Navajo Nation Council and the Naa'bik'iyati' Committee.

"It's a fiscal year 2013 project. We hope to be bid-ready by February, meaning advertisements soon after," he said. "We're hoping to deliver the project as a whole, that's our intent on entering into an IGA with the Nation."

Chuck Gillick, acting director for ADOT's Flagstaff District, said he would check with the city of Flagstaff regarding annual maintenance costs for sidewalks.

Chaco said cost estimates for the lighting and sidewalk maintenance would give NDOT a clearer picture of budget costs for the maintenance agreement that must be crafted in coordination with the IGA.

However, liability was still the main concern for NDOT.

Audra Merrick of ADOT Flagstaff District Development reassured NDOT that highway lighting through the corridor would be the responsibility of ADOT.

Chaco said council delegate Walter Phelps (Birdsprings, Cameron, Coalmine Canyon, Leupp, Tolani Lake) has wrestled over the issue of liability with attorneys from the Navajo Nation Department of Justice for the past year.

Phelps is the sponsor for the IGA legislation.

Chaco explained that NDOT maintenance crews are currently obligated to remove snow across the Navajo Nation. The maintenance of sidewalks would be a tertiary consideration, he said, especially with the number of Navajo chapters requesting road maintenance activities.

Coupled with the cost of sweeping the sidewalks at least four times a year, Chaco expressed concern about where the necessary money would come from, especially when tribal transportation funds have dwindled in recent years.

"We would love to deliver this project as the entire piece, from an economy of scale perspective and also to benefit the community," said Boschen.

He said one alternative would be to take out the sidewalks, which is undesirable because it would open up the roadway to pedestrians and potential accidents. The other alternative is to scrap the project entirely and proceed with another project, in order to meet the federal obligation.

"It looks like this is a good project, very impressive for $35 million," Chaco said.

NDOT is currently moving the IGA through the SAS 164 review process before presentation to the Resources and Development and Naa'bik'iyati' Committees.

More information is available at www.navajodot.org.