Hopi High runners to compete in national Wings of America meet
Lady Bruins Christen Ben and Claryn Josytewa to travel to St. Louis, Mo. to run in front of college scouts on all Native American team 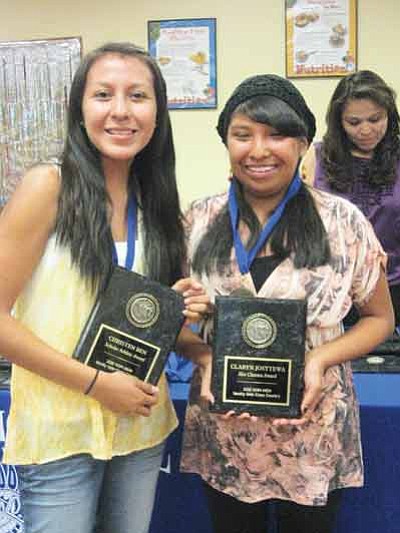 Christen Ben (left) and Claryn “Mighty Mouse” Josytewa have had a great school year. In November, they were part of the Hopi High girls cross country state championship team and recently qualified for the Wings of America team, earning a trip to compete in St. Louis, Mo. Stan Bindell/NHO

Lady Bruins Christen Ben and Claryn "Mighty Mouse" Josytewa earned the right to run in the Wings of America race after sub-20 minute finishes in the Nike Southwest Regionals at Toka Sticks Golf Course in Mesa.

The duo is among the 14 runners to qualify out of 52 competing for the slots. Several of the 52 runners are already collegiate runners and some of the high school students made the Wings team last year.

Ben and Josytewa will be in St. Louis from Jan. 30-Feb. 3 to see if they can make the U.S. team, which will compete in Poland this summer.

Wings of America is an all Native American team with runners younger than 20 years old. The team encourages the appreciation of life through running. Team members get a chance to run in front of college scouts who may offer them scholarships.

Hopi High girls cross country coach LaVerne Lomakema said she is extremely proud of the girls. She took five of her runners to the Nike Southwest Regionals and although the other three didn't make the Wings team she emphasized that at least they had the experience.

Lomakema said Ben and Josytewa will have opportunities to earn scholarships while competing against high quality runners.

"Running at this level shows their dedication to the sport," she said. "I'm not there everyday to tell them what to do."

"Then it's up to them to do it," Lomakema said. "This is a very good chance for the girls to showcase their talents. This shows them the more serious side of running so they know if it's something they want to pursue."

Lomakema thanked the parents for bringing their children to the Nike race. She thanked Wings because they provided some financial assistance including lodging. Wings is paying for the trip to St. Louis for Josytewa and Ben. They will also provide uniforms, warm-ups, sneakers and meals.

"It's neat that they get to represent the school, the community and their families," Lomakema said. "Their families are proud of them."

Josytewa, a junior, said she hopes to get a better education and job through running.

"My mom and family want me to go because it's a good opportunity," she said. "It's like a college race."

Ben, also a junior, said this is a great opportunity because of the chance for scholarships as well as seeing how college runners compete. She plans to major in criminal justice at the University of Nevada Las Vegas or Fort Lewis.

"My mom is proud and happy. The family is going to St. Louis to support me," she said.