Flagstaff activists join Idle No More movement for Jan. 8 protest
Protesters voice concern over snowmaking on San Francisco Peaks and champion rights of indigenous people in northern Arizona and beyond 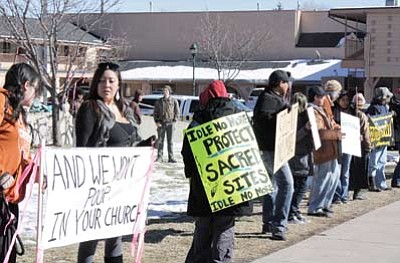 More than 40 people gathered outside Flagstaff City Hall Jan. 8 as part of the Idle No More movement, which is steadily gaining momentum throughout North America.

The protest took place in part to voice opposition to snowmaking with reclaimed wastewater on the San Francisco Peaks by the ski resort Arizona Snowbowl, as well as to join others in the larger scale Idle No More movement.

Lyla Johnston, organizer of the Flagstaff Idle No More affiliate, said last week's event was about being in solidarity with the national Idle No More movement and incorporating local concerns including snowmaking at Snowbowl.

"Just making a visible stance and coming together as a family and as a community in order to see what we can accomplish together and what our next steps should be," she said. "We want to keep the narrative and discourse going about why short-term economic profit isn't worth the long-term environmental destruction."

Idle No More is an informal movement that sprang from online conversations between four women in Saskatchewan, Canada concerned about the implications of Bill C-45. The bill is a sweeping piece of budget legislation, introduced by the government in October, that critics feel imperils the protection of thousands of Canadian streams and lakes and amends Canada's Indian Act without consulting First Nations, further eroding their sovereignty. The bill passed into law in December.

The First Nations are a collection of Canada's indigenous peoples, made up of 50 to 60 distinct nations and representing more than 600 communities. They are similarly situated to but considered distinct from two other Native Canadian populations, the Métis - descendants of mixed French and First Nations heritage - and in the far north, the Innu and Inuit.

"Idle No More is really a grassroots movement that is gaining powerful momentum. It started with four indigenous women in Canada to address the anti-indigenous bills there," said local activist Klee Benally. "It's now turned into a call for support, which is really a call that reaches everywhere that we're struggling to protect our environment and basic human rights. And that struggle knows no borders. So we are here today to honor that struggle to support the resistance in Canada to not only those bills, but the ongoing resistance."

Protesters gathered around in a large circle beginning around 10 a.m. and took turns speaking their minds to each other and whoever else would listen. Some individuals led the group in song, some led the group in prayer, but all were there to speak out against the desecration of their holy land, and the destruction of the land and environment.

Johnston said ultimately the movement is about indigenous people asserting their right to protect the earth. She said, for her, it is very much an environmental movement.

"It's not necessarily about human rights protecting our rights, but protecting the human rights to save the earth, the earth's rights," said Johnston, who also made the Facebook page for Flagstaff's Idle No More. "Since indigenous cultures are inextricably woven into environment, we can feel the blows a lot more than societies that are disconnected. It's just a natural form of self-preservation to preserve the land."

Protesters eventually held signs along Route 66/Hwy 89 stating their strong beliefs and personal convictions. Once sign read, "We don't poop in your church," a reference to snowmaking with treated effluent at Snowbowl.

Once the morning turned to afternoon, protest organizers set up a public address (PA) system with an open mic for people to openly speak their minds.

Benally, who admits he is known locally for not being idle, said not all community members have been idle either. There has been plenty of opposition to snowmaking with reclaimed wastewater on the San Francisco Peaks.

"Wherever there is environmental injustice that is happening there is a social and cultural crisis usually because we are people of this earth," Benally said. "So it's a powerful moment for so many who have been idle as they are waking up to hear that call to stand up and speak out. People are out there demonstrating their concern and their support, and that's powerful."

Benally went on to criticize Flagstaff City Manager Kevin Burke, saying he has done nothing to warrant him keeping his position. He also pointed out what he feels is the role of the federal government in all this controversy.

Cooper Curley, another activist who spoke to the crowd, said the Idle No More movement has grown from focusing on only indigenous rights to including human rights and land rights as well. He said he believes it's time to update the treaties between all indigenous people and the governments to which they are signed, in the United States and all countries.