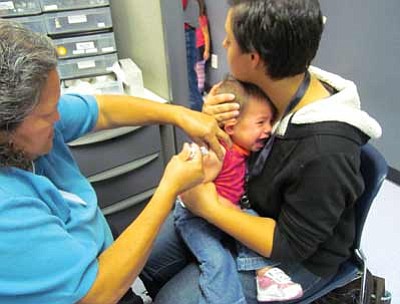 The percentage of Arizona parents citing personal beliefs in opting out of vaccines required for children has increased steadily since 2000 yet remains relatively low overall: 3.4 percent among kindergartners during the 2011-2012 school year, for example.

But Will Humble, director of the Arizona Department of Health Services, looks with worry at other numbers detailing immunizations against diseases such as measles, mumps, whooping cough and chickenpox. Those immunizations have much higher percentages of parents opting out in ZIP codes around the state.

In schools and communities within those ZIP codes, he said, diseases largely unseen today in the U.S. could circulate easily.

"There are ZIP codes in Sedona and other places where there is a real risk of a very severe outbreak of a lethal disease," Humble said. "And since it hasn't happened yet, they see it as theoretical. But if you ask me it's a matter of time."

While most states allow parents to opt out of vaccinations for medical or religious reasons, Arizona is among a minority that allows exemptions for philosophical or personal reasons. A state law allows parents with children in schools, preschools and child care centers to submit a personal beliefs exemption without consulting a medical professional.

In interviews with Cronkite News, experts and advocates said the fear of side effects, belief that certain diseases aren't harmful and desire to live a natural lifestyle contribute to the rise in personal beliefs exemptions, as does some parents finding it more convenient not to vaccinate.

"Arizona has been very open to giving parents choices in these matters," said Rep. Debbie McCune Davis, D-Phoenix, program director for the Arizona Partnership for Immunization. "Where it is becoming a concern is the increase in the use of exemptions."

The personal beliefs exemption allowed by the state requires parents to sign a form acknowledging that they understand the risks of not vaccinating and that unvaccinated children could be excluded from school if an outbreak occurs.

In the 2011-2012 school year 3.4 percent of kindergarteners had personal beliefs exemptions for at least one required vaccine. For the 2000-2001 school year that figure was 1.4 percent.

State and county health officials say that beyond those numbers are areas and schools with much higher opt-out rates and as a result lower immunity and greater risk of disease outbreaks.

In Yavapai County, 9.2 percent of kindergarteners, 9.4 percent of sixth-graders and 11.5 percent of 10th-graders had personal beliefs exemptions on file for the 2011-2012 school year. Yavapai County health officials said rates were especially high in Sedona, Cornville and Oak Creek as well as Prescott.

In Coconino County, 6.2 percent of kindergartners, 11.6 percent of sixth-graders and 4.1 percent of 10th-graders had personal belief exemptions.

Dr. Karen Lewis, medical director for the Immunization Program Office at the Arizona Department of Health Services, said that clusters of higher exemption rates and the lower immunity levels that result put schools and communities at risk.

"People of like belief tend to hang out with each other," Lewis said. "So you are more likely to have contact with other people who are not immunized, and you can have a rapid spread of a very serious illness quite quickly."

McCune Davis helped sponsor a bill during the 2012 legislative session that would have required parents submitting personal beliefs exemptions to first talk with a health professional. It wasn't taken up in committee.

She said the change could reduce exemptions based on convenience or bad information that stokes fears among parents.

"I think that they are being used for convenience instead of being used the way they are intended," McCune Davis said.

He went to soccer practice, but the coach sent him home. That night he started vomiting. The next day, suffering chills and saying he was unable to feel his feet, he was in the hospital.

Less than 24 hours after his first symptom, Chris Maier died of meningococcal meningitis, a disease that today can be prevented by a vaccine.

Shortly after her son's death, Leslie Maier learned that the Food and Drug Administration had approved a meningococcal disease vaccine for adolescents. She helped lead the campaign for Arizona to require it, which happened in 2008.

"I don't think that all parents realize that there are diseases so deadly as meningitis that could take their healthy child in less than 24 hours," she said.

Maier said that if Chris had lived he would have likely lost his arms and legs and been brain damaged. She hopes that by educating other parents about the risks she can prevent other kids from getting sick.

"I think when kids get vaccinated, at least against meningitis, they get saved from horrible side effects, if not death, from getting that disease," she said.

Other diseases prevented by vaccines, including measles and whooping cough, can be fatal.

Even chickenpox, which many parents think of as minor, can be very serious, said Shoana Anderson, office chief for the Office of Infectious Disease Services at the Arizona Department of Health Services.

"People forget that people die of chickenpox," Anderson said. "When you've seen a hundred people survive it seems like one death is a rare event, but when that one death happens to you it's very tragic."

Experts say vaccines also protect others who can't be immunized because they are too young, such as newborns, or have medical problems. Higher vaccination rates create what's known as herd immunity, a level of immunity in the population that makes a disease unlikely to spread.

Machrina Leach, nurse program manager for Maricopa County Department of Public Health, said diseases like measles and pertussis, also known as whooping cough, can be especially dangerous for infants and those with weakened immune systems.

One baby in Maricopa County died this year of whooping cough, the most common vaccine-preventable disease in Arizona, and Leach said that death could have been prevented if everyone around the baby had been immunized.

Whooping cough has been on the rise over the past several years, with 901 cases across the state in 2012 through Dec. 10. Although rare, measles, mumps, tetanus, meningococcal meningitis and other diseases prevented by vaccines surface periodically in Arizona.

Dr. Karen Lewis said that parents should consider the risks before not vaccinating children.

"I understand that they have a right to choose not to have their children vaccinated, but the rest of us have a right not to be exposed to vaccine-preventable diseases," she said.

Even diseases like polio that have been nearly eradicated in the United States pose threats, Lewis said.

"We work vigorously to educate the public about the importance of vaccination, that all of these deadly diseases, even though you don't see them very often in this country, they are only a plane ride away from anywhere else in the world," she said.

The Arizona chapter of the American Academy of Pediatrics plans to advocate again during the 2013 legislative session for a law requiring parents seeking vaccination exemptions to be counseled by a health professional on the risks.

Sue Braga, the group's executive director, said such a requirement would address problems with parents getting exemptions for the sake of convenience or because of bad information, while still upholding the right of parents to make their own decisions.

"It involves education, getting rid of any misinformation," she said. "Hopefully we can start raising the herd immunity levels so we're not compromising other people in the community."

"When a health care provider has the opportunity to meet with a parent and talk with them not only about the risks but the benefits of vaccines, the parent makes better choices," she said. "The decision that comes is better informed."

Humble, said he'll evaluate results of the University of Arizona's study on exemptions before considering next steps. But he said the decision to vaccinate affects more than just the child.