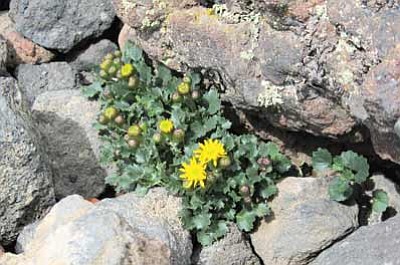 Hopi Tribal Council Chairman LeRoy Shingoitewa said after initial meetings with officials between the Hopi Tribe and these government agencies in Washington, D.C., the U.S. Fish and Wildlife Service informed the tribe of their intention to review whether snowmaking with reclaimed wastewater would harm the plant.

"There's been a biological assessment that was supposed to be dealt with before further actions could be taken, yet Fish and Wildlife made a decision to allow snowmaking to take place," said Shingoitewa.

Based on these initial meetings and the Fish and Wildlife Service's plan to assess possible threats to the groundsel, the Hopi Tribe withdrew its action pending the outcome of further consultation.

"It does not close the door for us to take further action based on what final decision may be made after a true evaluation is made of the biological assessment," Shingoitewa said. "There has to be a modeling done in regards to the wind directions and whether or not it will endanger the groundsel."

The Fish and Wildlife Service has 90 days to complete the biological assessment, according to the Hopi chairman. After completion the tribe plans to sit down with Fish and Wildlife to discuss the full evaluation of the results found. The Hopi Tribe plans to continue discussion with the Justice Department as well.

"Whether or not consideration was given at the beginning, the Hopi Tribe found out that the groundsel is a species that is protected," said Shingoitewa. "Based on that we filed our lawsuit."

The San Francisco Peaks groundsel is a dwarf perennial alpine plant that grows low to the rocky ground where it is found, to a height of only 1.25 to 4 inches. Flowering stems emerge from ruffled-edge leaves with purple undersides. These stems hold clusters of one to six flowers that each contains eight to 13 yellow ray flowers.

"The ski resort exists under recreation permit by Fish and Wildlife, yet all around the Snowbowl is considered wilderness area," Shingoitewa said. "And so it could be that wastewater could harm the wilderness area, again the direction of the wind is really critical in the analysis."

Shingoitewa stressed the importance of his tribe's relationship to the San Francisco Peaks, and that it is critical for Hopis and other Native tribes to know it is a place that they all highly respect.

Snowbowl attorney Catherine Stetson intervened in the lawsuit and successfully fought the Hopi Tribe's assertions on a couple of technicalities.

The Hopi stated in a letter written in 2012 that it had just procured an expert report, which raised new concerns about snowmaking harming the plant. Stetson argued the tribe could have brought its complaint years ago, as far back as 2004.

In addition, Stetson wrote to a federal judge that the tribe didn't wait a required 60 days to file suit after giving notice of specifically why it might sue, as required under the Endangered Species Act. Also, the Hopi didn't specifically say in its lawsuit how tribal members would be harmed if the San Francisco Peaks groundsel is affected by snowmaking.

Arizona Snowbowl started making snow with reclaimed wastewater on Dec. 24. An organization called True Snow claims representatives of the group went to Snowbowl the next day to find that the newly dispersed snow was a bright shade of yellow.

The complaint filed by True Snow says that snowmaking is legal, but Arizona Department of Environmental Quality (ADEQ) regulations and the city contract do not permit the use of treated sewage effluent for skiing.

"I am deeply disappointed in our local and state government for not pressing Arizona Snowbowl to follow the letter of the law. It is completely irresponsible of the city and ADEQ to simply sit back and let Arizona Snowbowl do whatever they want," said Rudy Preston, founder of True Snow. "The health of every skier, snowboarder, and employee at the resort is in their hands and they just don't seem to care. When I decided to dig a little deeper in the city contract and Arizona laws, I was amazed to find that skiing on treated wastewater is illegal. We filed a complaint with ADEQ immediately."

Preston also said that Arizona Snowbowl violated its contract with the city because of a lack of prominently placed signs. And the signs Snowbowl did put in place had none of the required language as specified in the city contract. In fact, Preston said the signs were purple and seemed more a proclamation of conservation efforts and not a warning of any kind.

The complaint filed by True Snow demands that the city suspend delivery of the water and ultimately terminate the contract in its entirety due to the fact that some violations have no remedy.

"Even though state law allows A-plus wastewater to contain some fecal coliform organisms and enteric viruses, many people seem to think that A-plus treatment standards means the wastewater is clean and safe enough to drink," said True Snow volunteer Katie Nelson. "This common misconception of treated sewage effluent is giving people a false sense of safety. No amount of signage, descriptive or not, will prevent ingestion of reclaimed wastewater snow while skiing. It is the city's responsibility to uphold the law and cancel the contract."

"Treated sewage effluent is being tracked into lodges and eating areas and being transferred to water fountains and sinks," Preston asked. "How can Snowbowl prevent this?"

Arizona Snowbowl officials did not immediately respond to phone calls and could not be reached for comment.