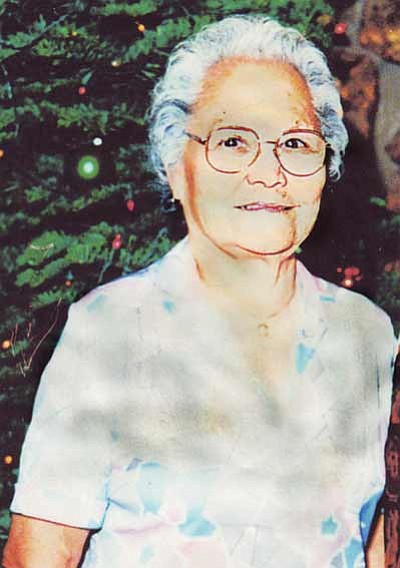 After a long illness, Eleanor S. Nez passed away at home surrounded by family in Tulsa, Okla. on December 18, 2012. She was born January 12, 1926 in Polacca, Ariz. where she lived with her father Lalasti and her two sisters, Lucille and Grace.

At an early age Eleanor and her sisters were taken to Oklahoma and raised at Bacone Orphanage. Eleanor attended and graduated from Ganado Mission High School in Ganado, Ariz. She then went back to Oklahoma and attended Bacone Junior College. From there she entered the L.P.N. program at St. Frances in Santa Fe, N.M. She worked 38 years as a nurse before retiring and moving back to Oklahoma. During her nursing career she worked at St. Frances Hospital and Gallup Indian Medical Center in Gallup, N.M., Keams Canyon IHS (Indian Health Services) in Keams Canyon, Ariz., Tuba City Indian Medical Center in Tuba City, Ariz., and two years at a private hospital in California. Her last 11 years of nursing was at Tuba City Medical Center.

Eleanor loved working with children and became known as the "number one" mother to the kids. She once said that the best was to see the kids get well and go home, and the sad was when they ended up back in the hospital.

When Eleanor retired she moved to Flagstaff for two years to be with her younger sister until she passed. Eleanor then moved to Muskogee, Okla. to be near her oldest sister. She was living in Tulsa the last two years.

The family would like to thank the Naha and Tootsie families who offered their time, homes, hard work, and support during this time and all others. We would also like to thank the Hopi Tribe Burial Assistance for bringing her home. Thank you also to one special nurse at South Crest Hospital who was by her side at all times even on his days off. Thank you to all the wonderful nurses from hospice who were there for her support and the family, both which were in Tulsa. Thank you all for being with us during this sad time. Eleanor will surely be missed, but she is now at peace.

Eleanor is survived by her daughter Bonnie J. David of Tulsa; her sister Lucille Kodaseet of Muskogee; her granddaughters Bobbie J. Polacca of Tulsa and Tanya A. Nelson of Flagstaff; her great grandsons Darryl L. Polacca of Muskogee and Charles Cody Polacca and Joshua C. Fixico of Flagstaff; her great granddaughters Martika E. Johnson of Tuba City, Angel N. Nelson of Flagstaff, and Syrena B. Polacca of Tulsa; and her great-great grandchildren Oliver L. Martinez and Nayeli G. Martinez of Tuba City and Zoey Sutopka Polacca of Flagstaff. Eleanor is preceded in death by her father Lalatsi Letseoma, her son Darryl R. David, and her sister Grace M. Letseoma.