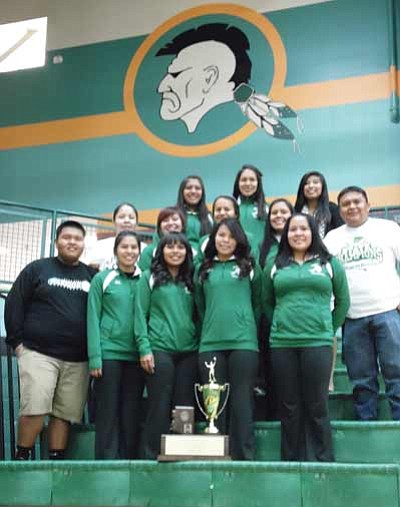 For the past four decades, Tuba City High School (TCHS) has been known as the school to beat on the basketball court and at Junior Reserve Officer Training Corps (JROTC) shooting competitions. The school produces a large number of Chief Manuelito and Gates Millenium scholars every year as well. But now TCHS can add another notch to their winning belt, the 2012 state championship volleyball trophy.

Playing against Safford High, TCHS's talented players included Kristen Becenti, who added a state runner-up, two Final Four appearances and a state championship to her list of athletic accomplishments, and outside hitter Shiniya Henry, who led the team during the first part of the season.

"It was a total team effort," Barlow said. "We had Gabrielle Hemstreet, Samatha Endischee, Samantha Yazzie, Rachel Yazzie and Lacey Eldridge who came off the bench and assisted throughout the season."

The winning score against Safford High was 25-21. Prior to that game, Tuba City beat Empire High School 25-9, Mingus High School, 25-16, Seton-Catholic 25-22 and finally Safford in the championship game.

"We have had the talent, but in the past years we've come up short," Barlow said. "But I knew if we could work hard, we could bring a state championship trophy home back to Tuba City."

"So, I would really have to say it was their serious dedication, their commitment to sacrifice time away from their families in the summer to work on their skills and in doing so, they have done their community proud by bringing home a state trophy. We have also had such a supportive administration and family, community behind us, they believed in us and you could feel that support and energy. It wasn't easy. These girls worked really hard and they definitely deserve this and more. They have now made history in Tuba city High School athletics," he said.

Barlow said if the team made mistakes during the season they corrected them before heading to the state competition.

"At state, you can't afford to make any mistakes at all," he said. "That's what the pre-season and tournaments are for. I still don't know all the coaching answers and will always look to past and current coaches for advice and just really look at my own learning experiences. Tuba City volleyball has now become a real 'powerhouse' team and we need to learn how to keep that going. We are now the new state defending champions. It's going to be a new challenge to repeat and defend our school title. But at least we know now what it is going to take to win at state. We just have to prepare, prepare, prepare."

"Someone who is willing to sacrifice time. and I don't mean just a little time, I mean time away from everything," he said. "Family gatherings, reunions, hanging out with friends on the weekend to work on improving their skills in playing. They also have to be willing to put in time to fundraise, that's what these girls did. Volleyball wasn't just their main focus, they also knew they had to keep up their academics to be eligible to play, so we also focused on getting their grades up. They showed being dedicated to school, volleyball and being a team player is what makes a successful state winning team, and these girls are exactly that."