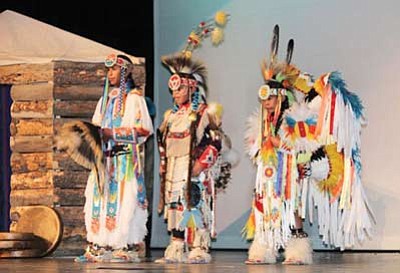 Master of Ceremonies Alfred Clark introduced the various performers and shared amusing anecdotes along the way. The stage was set with a realistic façade featuring a Navajo hogan, complete with a traditional rug weaving over the doorway. Every classroom contributed paper reproductions of Navajo rugs in mosaic form, which lent style and beauty to the setting.

Fifth grader Jessika Tso began the evening with the national anthem, singing in both English and Navajo. Mrs. Slimko's second grade class followed in Navajo with the Pledge of Allegiance and "My Country 'Tis of Thee." During the evening, first and second place Native American essay winners Wheylaya Becenti and Caitlyn Clark shared their inspiring essays with the audience.

Various IW students performed in the talent show portions of the program, demonstrating talents ranging from singing and dancing to tying a traditional Navajo hair bun. Interspersed throughout the program were video interviews of many IW students sharing their favorite native traditions and foods and the reasons they are proud of their heritage.

Students in several types of attire took the stage during the fashion show segments of the program. Students of all ages, outfitted in traditional, tribal, native contemporary or western clothing, mounted the platform and executed pirouettes for the audience before stepping down and off the stage. IW fifth and sixth grade students then performed the "I Walk in Beauty" song.

Holbrook Unified School District No. 3 Superintendent Dr. Robbie Koerperich contributed to the festivities with a few of his recollections as the first principal of IW. Dr. Jeri McKinnon, current principal at IW, joined him onstage to receive a bouquet of appreciation from the staff.

Near the end of the program school staff awarded four sheepherder baskets, donated by IW staff, as door prizes. The school played host to an informal reception with light refreshments after the show as attendees browsed the IW Student Art Display in the gallery. The Native American Art Contest winners were Cedric Joe, sixth grade, firstplace; Myron Begay, fifth grade, second place; Jenna Johnson, third grade, third place. Families were also offered the opportunity to have a picture taken with their children. A photo booth with a lovely, native-inspired backdrop provided memories of the occasion.

IW has presented Native American Night in the multipurpose room of the school for many years. However, this was the first time the event took place in the George Gardner Performing Arts Center. Performing in a venue such as this was a wonderful opportunity for the young students and it greatly enhanced the presentation designed by Theresa Yazzie and the IW School Environment Committee.