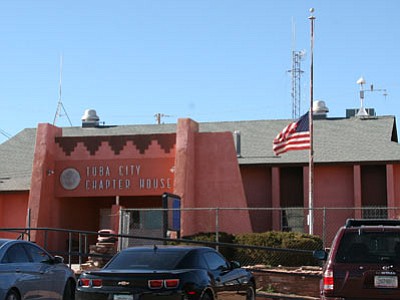 The U.S. flag flies at half mast in front of the Tuba City Chapter House in honor of Staff Sgt. Jonathan D. Davis, of Kayenta, Ariz., who was killed Feb. 22 in Afghanistan.

"The Navajo Nation mourns the loss of a warrior who gave his life defending freedom," Navajo Nation President Ben Shelly said. "We are saddened by the loss of our warrior and we offer our prayers to the family during this difficult time. Staff Sgt. Davis was a valued member of the Kayenta community and often remembered for helping to bring home two state high school basketball championships in late 1990s. His presence will be missed."

Shelly ordered the Navajo Nation flag be lowered from sunrise Feb. 26, through March 1, and again on the day of his funeral service.

According to the Navajo Nation Veterans Department, Davis is the 13th Navajo member of the armed forces to be killed in action in the wars in Iraq and Afghanistan.