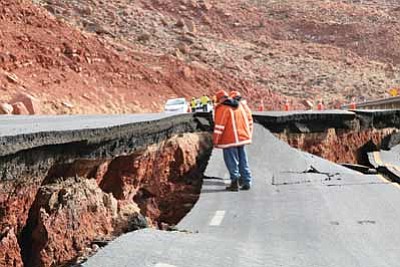 Arizona Department of Transportation employees survey damage to US 89 south of Page. The damage occurred Feb. 20. More than 500 feet of pavement is damaged likely because of a geologic slump. Photo/ADOT

The Arizona Department of Transportation (ADOT) is still trying to determine what caused the ground to shift beneath US 89 Feb. 20 causing a 150-foot section of pavement to buckle about 25 miles south of Page.

Geotechnical engineers began evaluating the stability of the mountain slope on Friday.

Taft Blackhorse, manager of the Navajo Division of Transportation (NDOT) Department of Project Management, said the road damage was likely the result of a slump.

"I don't think it was a small earthquake or tremor. It appears to have been loose soil that eventually eroded, commonly known as a slump," Blackhorse said.

According to the U.S. Geologic Survey, a slump occurs on hillsides that have a thick cover of loose, rocky debris, commonly taking place after heavy rains saturate the ground.

Robert Samour, ADOT senior deputy state engineer of operations, said in a press release last week that the agency initially thought there was 500 feet of damaged pavement. After taking a look from an airplane, he said the damaged area could larger.

"The area over the guardrail drops off a couple hundred feet; we saw some cracking in the soil down the slope, so I would say that this is probably a 500- to 700-foot section that we're going to have to take a good look at for settlement," he said.

US 89 will remain closed for an extended period of time. ADOT said there is no timetable to reopen the highway.

ADOT is diverting traffic at US 89A to State Road 98 and on to US 160 for travelers headed to Page.

ADOT is working with the Arizona Division of Emergency Management and the Arizona Governor's Office on an emergency declaration that will allow ADOT to receive federal reimbursement for highway reconstruction. ADOT will continue its geotechnical investigation, and then the engineers will look at a permanent fix which ADOT will pay for.

"We're going to work on reconstructing the damaged highway as quickly as possible, although it's premature to lay out a timeline," Samour said. "We recognize how important US 89 is to the community of Page and the Lake Powell region and that's why we met with key stakeholders today, including the mayor of Page. We will work through the process of determining what happened beneath the highway and figure out a best plan for a long-term fix."

NDOT director Paulson Chaco is working with the Bureau of Indian Affairs (BIA) and Coconino County to maintain alternate dirt roads for travelers in the area.

"We have NDOT crews working with the BIA to complete blading activities and to assist with setting up electronic message boards to alert motorists of the road closure," he said.

"We are asking for consideration that a state of emergency be declared," Shorty said.

The commission drafted an emergency declaration and is awaiting approval from Navajo Nation President Ben Shelly.

A semi tractor-trailer truck is stuck on the dirt road N20 after trying to detour around the closed road.

NDOT principal civil engineer Darryl Bradley said N20 and other dirt roads in the area are not made for heavy truck traffic because of sandy conditions and patches of rough road.

"ADOT conducted a feasibility study to use N20 as a new alignment for a state road that would basically remove US 89 off of their inventory," Bradley said. "I guess it was cost prohibitive, so it never went any further than that."

Presently, NDOT and the BIA are looking at paving N20, the 28-mile stretch of dirt road, from LeChee to Gap, at an estimated cost of $50 million.

"ADOT has closed off traffic on the north and south ends," Williams said. "They estimated the road will be closed for at least two months before it's repaired."

NDOT and the BIA are working with Coconino County to maintain nearby BIA and county roads in anticipation of increased traffic.

Coconino County is maintaining N21, which stretches 28 miles from Kaibeto to Gap. Currently, 4.5 miles of this road is under construction from Tonalea to Kaibeto.

NDOT road crews are on standby in the western agency for possible assistance with roads in the area.