Millions at stake as deadline looms for tribal class-action settlement 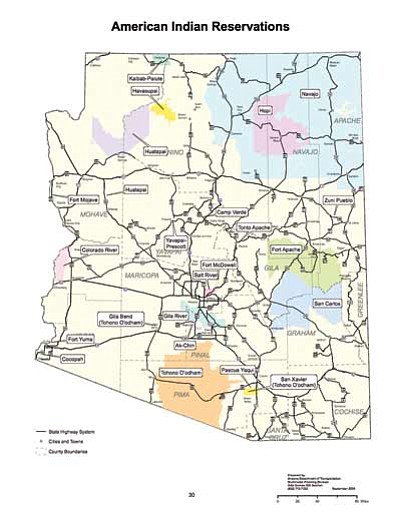 Thousands of Native Americans in Arizona are among the roughly half-million nationwide who are expected to benefit from the settlement of the Cobell lawsuit against the federal government for its mismanagement of trust funds. Photo/Arizona Department of Transportation

About $42.8 million has been paid out to Native Americans in Arizona since December, and another $109 million could be distributed starting next month as part of a multibillion-dollar settlement of a lawsuit against the government.

But any remaining beneficiaries of the Cobell class-action suit have to file claims by March 1 to have any hope of getting a check, said fund administrators.

They said it is impossible to know exactly how much will be paid out from the $3.4 billion Cobell settlement, or to whom, until after March 1 when they can begin processing the last claims.

"We won't know until all of that has gone out," said David Smith, a litigator who has worked with the Cobell class throughout its negotiations.

Nationwide, more than $265 million has been paid out so far under the settlement, which was designed to partially reimburse Native Americans for decades of mismanagement of tribal trust funds and lands by the federal government.

In 2009, the president approved a settlement of the suit, which was agreed to by Congress in 2010. After two more years of appeals, the settlement was finalized and fund administrators were able to begin making payments in December.

The settlement was a victory for Native Americans, but "it doesn't really come close to what the impacts have been on everyone" from the government's mismanagement, said John Lewis, executive director of the Inter Tribal Council of Arizona.

"It seems to be more of a token amount, but I think it is important historically," Lewis said.

In Arizona, most of the settlement payments will likely go to members of those tribes that own a lot of land, Lewis said. And Smith said tribal lands in Arizona could be particularly valuable when it comes to settlement payments.

"Arizona has considerable mining and gas resources on Indian land," Smith said. "Arizona is on the higher end of those states that are receiving money."

Fund administrators have already cut $1,000 checks to more than 230,000 members of the first, known settlement group, which numbers about 328,000 people. Another 55,000 of those beneficiaries have had checks deposited in their Individual Indian Money (IIM) accounts.

"We continue to look for those people," Smith said of the IIM deposits. "It's important that those individuals be identified."

The fund is holding checks for another 40,000 people in the first class who died, leaving ownership of their IIM accounts unclear.

Several thousand more beneficiaries have been identified but have not yet been found, said Jennifer Keough, executive vice president and chief operating officer for Garden City Group, the bank handling the payments.

"We've come a long way and made a significant dent in the information the government gave us," Smith said. "We want to make sure everyone gets their checks."

Garden City Group started mailing checks Dec. 17 and continues to do so as more information is collected. But with the March 1 claims deadline looming, Smith said the bank has been scrambling to process all of the requests.

"The number of calls received in January and February were extraordinary," he said.

The goal is to issue the final checks by August or September this year, he said.

Although this process has been difficult, Smith said it has been much easier than the battle to win the settlement in the first place.

"The greatest challenge over the years has been getting the government to acknowledge and recognize that (trust mismanagement) was a possibility," Smith said. "At times it's been very frustrating."

Smith said that the biggest gain was that the suit pushed the government to re-examine its trust system, spending more than $5 billion to improve it, with the Interior Department committed to continuing the reform.

Lewis said that if nothing else, the suit will help prevent history from repeating itself.

"It's good in kind of a bittersweet type of thing," Lewis said. "I just hope we can make the system work in a more effective way in the future."