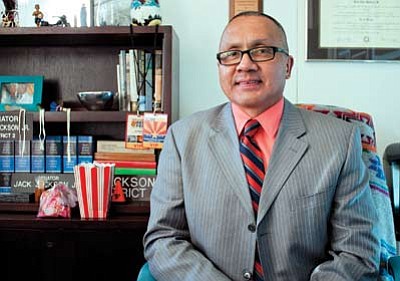 State Sen. Jack Jackson Jr., D-Window Rock, is a primary sponsor of a bill that would boost public alcohol and drug treatment centers in communities near the Navajo Nation. Photo/Lauren Saria

In some northern Arizona communities, excessive drinking and cold weather can have deadly results.

"We have people that will freeze to death in the winter," said Sylvia Allen, a Navajo County supervisor and former state senator.

Allen said a part of the solution should be creating public alcohol and drug treatment centers in communities bordering the Navajo Nation where public intoxication is a concern. She said overly intoxicated people can unintentionally commit crimes, injure others and endanger themselves by passing out outside or walking into traffic.

"I think the key is getting them off the street before they get to a medical situation," she said.

Allen and lawmakers from the northern part of the state want to provide money to address the problem. Sen. Chester Crandell, R-Heber, authored SB 1273, which would establish an alcohol and drug abuse pilot program fund for Coconino, Navajo and Apache counties.

The bill calls for the pilot program fund to draw money from the existing state liquor luxury taxes, a percentage of which are already designated for alcohol and drug addiction treatment and prevention.

"What this does is allow them, the cities and counties, to go ahead and pick them up and take them into a safe haven so to speak," Crandell said.

The Senate Health and Human Services Committee endorsed the bill last week, forwarding it to the Senate Appropriations Committee, which hadn't scheduled it for a hearing as of last week.

Crandell said he modeled his bill after legislation Allen introduced last year. That bill didn't make it out of committee.

Sen. Jack Jackson Jr., D-Window Rock, a primary sponsor of the bill, said he's been working on the issue for the last three years. He would like the pilot program to create a treatment center modeled after the Na'Nizhoozhi Center Inc. in Gallup, N.M.

Jackson said the center's method of treatment involves cultural healing therapies aimed specifically at the Native American population. For example, a treatment program could incorporate the use of a sweat lodge, drumming session or talking circle.

"We want to find a way to treat people and to help them instead of running them through a circle in our jails," he said.

Na'Nizhoozhi Center Director John Jay Azua said in a telephone interview that Arizona would have a difficult time replicating the program because of differences in state laws.

In 2005, New Mexico passed the Detoxification and Reform Act, which reduced the liability for those who offer assistance to intoxicated persons - for example, police officers and health care professionals.

"Without the protection of the reform act, the liability would be too tremendous," he said.

Additionally, treatment facilities like the Na'Nizhoozhi Center aren't required to employ full-time upper-level medical professionals. Instead, they rely mainly on certified nurses assistants who work under the supervision of a part-time registered nurse, a practice Azua said is much less expensive.

Steven C. Barclay, executive director of the Beer and Wine Distributors of Arizona, told the Senate committee he opposed the bill because of concerns over raising money for the program.

Although the bill doesn't propose an increase in liquor taxes, Barclay said he was concerned the bill could potentially set up the state for increases in the future.

Amy Love, legislative liaison for the Arizona Supreme Court, saidraising money could be a problem because the fund identified in the bill has already been targeted by lawmakers to address other budget priorities.

She also said the bill would take revenue away from the counties not included in the bill.

"The biggest issue is this takes from the other 12 counties in order to funnel it up north," Love told the committee.