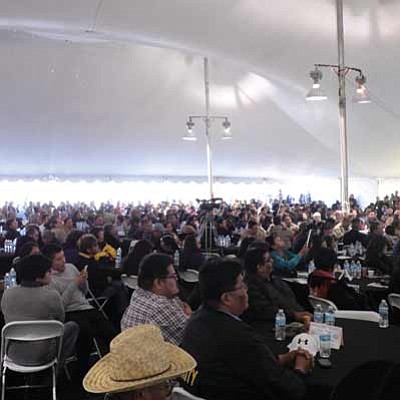 Close to 1,000 people crowded into a white tent set up next to the Tuba City Chapter House for the event. More people stood in the back of the tent area. Organizers lifted the tent flaps open in the northern section of the tent to allow the overflow crowd the opportunity to see and hear the celebration speeches.

Gerald Keetso, president of the Council of Natani'To'Nanee'Dizi Chapter gave a welcome address. Keetso said there was much history in the establishment of the new judicial building complex since the first police station for Tuba City was a historic building that is still located in uptown Tuba City. Keetso mentioned that tribal officials appreciate and recognize former chapter official Hope MacDonald Lonetree for pushing for money and working on a construction schedule for the new buildings.

Keetso also thanked the Southern Paiute Tribe for their support and thanked the designers of the buildings for their sensitivity to Native design and culture.

"This is a new era in the Navajo Nation," he said. "This new judicial building will provide us with a lot of public service, not just for Navajos but for all of us who live and work in this western agency area. It will provide justice for our people."

The American Recovery and Reinvestment Act (ARRA) paid for construction of the $74 million center. Almost $60,000 dollars came from the Navajo Nation budget. Sales tax money was also used during construction.

"This new judicial center will provide both cultural and traditional rehabilitative education for the inmates which we are hoping will help deter future criminal activity," Shelly said. "We must care for our relatives, even if they are doing wrong. We must help people help themselves. We all make mistakes. But we must also provide understanding and must make efforts at the policy level to help them. For the non-Indians who are in the audience today, I must tell you that the Navajo Nation is not a constitutional government. We are a tribal code and federal code government. That is how we will provide justice for our members. We must also remember "Ke'i" and think about how a peacemaking court can help serve us."

"As Native Nations, we must all work together, because at some point, our native people will be the citizens of the world," Jim sasid. "We must speak some of the same team, work and project language."

"(She has) just twisted everyone's arms at the Navajo Nation council over the past ten years to get the funding for these buildings, she did not stop," he said. " She wanted this for her chapter area so badly so she must get a large amount of the credit for these wonderful buildings. I thank her for her relentless pursuit of this."