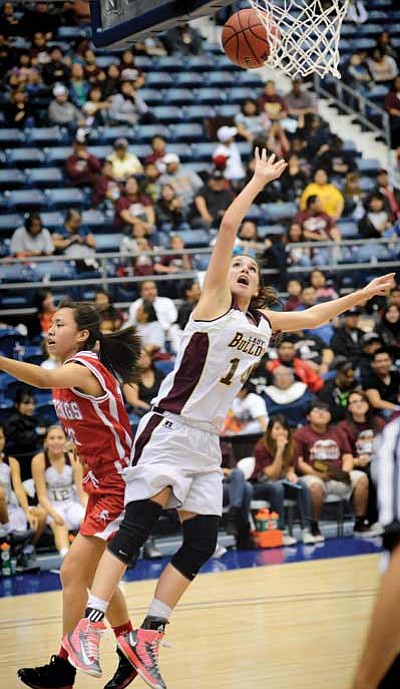 The Winslow Lady Bulldogs defeated the Monument Valley Lady Mustangs 62-30 in the Arizona State Division III Tournament in Flagstaff Feb. 16. The win improved Winslow's record to 24-5 for the season. Monument Valley finished its season with a 12-18 record.

The Lady Bulldogs played exceptional defense and the game was essentially over before the first half ended. Winslow scored the first 10 points and led 17-4 after the first quarter. Monument Valley did not score in the second quarter and trailed 31-4 at the half. The Lady Mustangs played better in the third quarter but Winslow still took a very commanding 49-18 lead into the final period.

Marcella Joe led all scorers with 22 points and did an excellent job of directing the Winslow attack. Shandiin Armao dominated the boards and scored 15 points for the Lady Bulldogs. Deeshi Thin was the leading scorer for the Lady Mustangs with 13 points. Ohiyah Shirley scored nine points for Monument Valley.

Teams from the northern section of the state were well represented in the tournament as Winslow, Holbrook, Page, Tuba City and Winslow all put together wins.