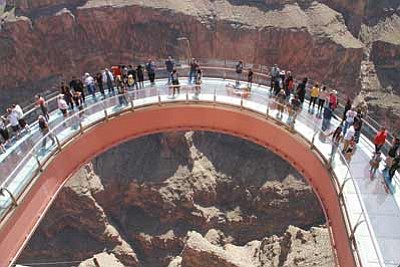 The Grand Canyon Skywalk on the Hualapai Reservation, which offers a glass deck for viewing the canyon from above, has been the subject of years of litigation. JC Amberlyn/Kingman Daily Miner

Grand Canyon Skywalk developer David Jin plans to go after $10 million in trust funds and 100 percent of the ticket sales for the glass-bottomed bridge on the Hualapai Tribe's property after a federal judge ruled Monday that Sa Nyu Wa, the tribe's tourism company, would have to honor a $28.5 million arbitration judgment in favor of Jin.

"Jin has no animosity against the Tribe. He knows that he invested $30 million of his own money to build the Skywalk and that the way he will recoup that investment and his future contractual rights is to resume operational control of the Skywalk," said Mark Tratos, an attorney for Jin's company, Grand Canyon Skywalk Development (GCSD).

Sa Nyu Wa is mulling its options in light of the ruling.

The arbitration judgment only applies to Sa Nyu Wa.

Grand Canyon Skywalk Development and Sa Nyu Wa have argued since 2009 over the proceeds from Skywalk ticket sales and who is responsible for finishing the visitor's center. The Skywalk is a horseshoe shaped bridge with a glass floor that juts out from the side of the Grand Canyon on the Hualapai reservation.

In February 2012, the Hualapai Tribal Council seized control of the tourist attraction's contract and handed it over to Sa Nyu Wa.

In August, an arbiter awarded GCSD $28.5 million in unpaid fees and damages. GCSD filed a request to enforce the award in Arizona's U.S. District Court in September.

Sa Nyu Wa countered GCSD's request and argued that the award was not legal because GCSD did not get a federal court order to force both sides into arbitration. It also argued that the arbiter overstepped his authority when he continued the arbitration talks after Sa Nyu Wa took over the Skywalk contract and officially ended the talks.

Specifically, Campbell found that the tribal council could not take away GCSD's right to arbitration under the contract the two sides signed in 2003 and because of that, the arbiter did not exceed his authority when he continued the arbitration talks and ruled in GCSD's favor.

Cieslak declined to say what the next steps for Sa Nyu Wa would be.

"Tribal leaders have always considered a number of legal options in order to settle this dispute and protect the rights of the tribe, including paying fair market price for the contract," Cieslak said. "They've always been eager to resolve this situation."

Sa Nyu Wa could appeal the ruling to U.S. Ninth Circuit Court, where GCSD has another case pending against the Hualapai Tribal Court challenging its ruling that tribal council could take over the Skywalk contract by eminent domain.