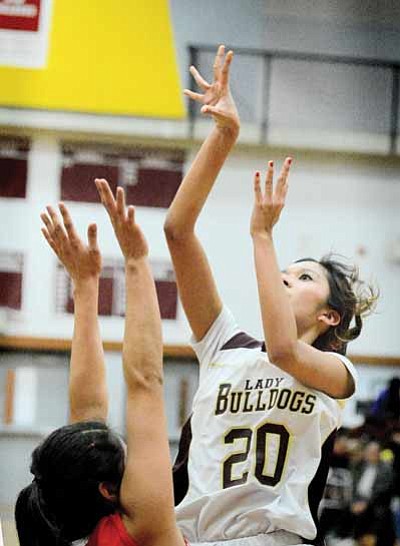 The Winslow Lady Bulldogs and the Valley Sanders Lady Pirates won first round games in the Division III Sectional Tournament at Winslow Feb. 5.

The Lady Bulldogs defeated the Page Lady Sand Devils 47-43. The win improved Winslow's record to an outstanding 21-4 for the season. The Lady Pirates defeated the Holbrook Lady Roadrunners 65-47 later in the day.

Page held Winslow in check early and led 5-0 after the first five minutes but Winslow cut that lead to 11-9 by the end of the first quarter. The Lady Sand Devils led 21-18 at the half but Winslow jumped ahead to a 33-26 lead after three quarters of play.

Anderson and Armao both fouled out leaving both teams missing an important inside player.

In the second game of the night Valley Sanders topped Holbrook 65-47. The win improved the Lady Pirates' record to 24-2 for the season and dropped Holbrook to a still respectable 20-12.

The Winslow Lady Bulldogs defeated the Valley Sanders Lady Pirates 59-44 in Chinle Feb. 8 in the Division III Sectional Tournament. The win improved Winslow's record to an outstanding 22-5 for the season.

The Lady Bulldogs started out strong and led 23-14 after the first period of play and 32-26 at the half. The margin was 43-36 after three quarters.